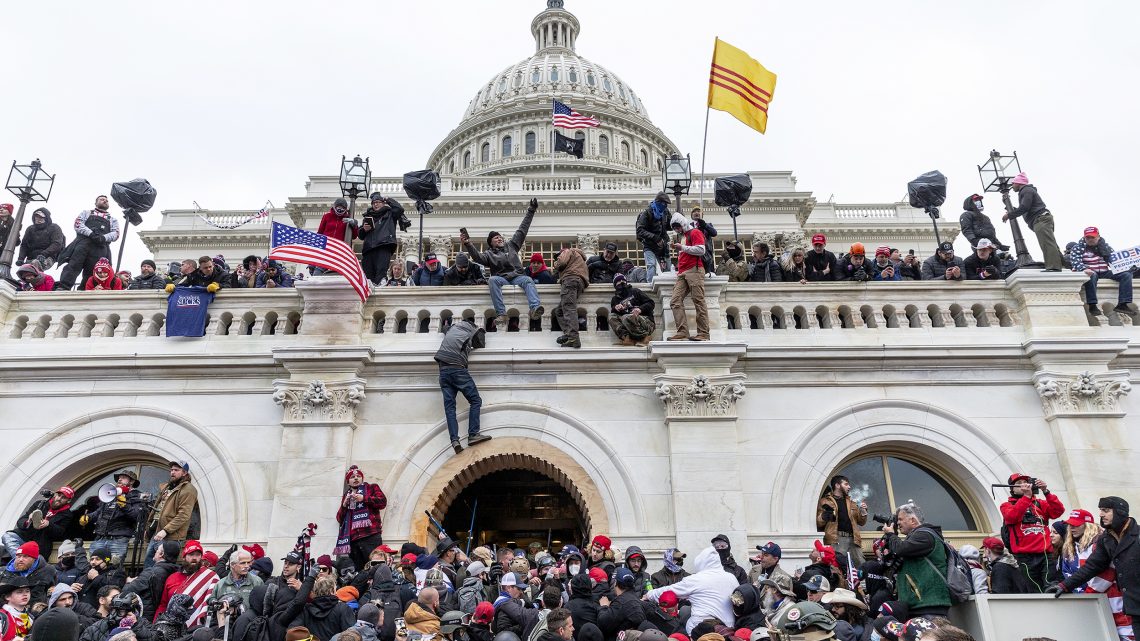 January 6, 2021 was an ignominious day in the history of this country. The President of the United States incited a riot in the people’s house in a hubristic and futile attempt to overturn the outcome of a free and fair election. While the size of the insurrection and the casualties and damage caused may not have been foreseen, the participants and their intent was clear from anyone with access to the Internet. One need not live on the deep web to have known what the President had in mind when he prompted his 88.7 million (former) Twitter followers with this exhortation: “Big protest in D.C. on January 6th. Be there, will be wild!” Or when he told a horde of masses that had gathered at The Ellipse that “we will never give up, never concede” and then directed them to march down to the Capitol to “show strength and…be strong.”

In the aftermath of the riot, Twitter (and various other platforms) denied Donald Trump service. Major corporations are refusing to endorse any politician who sought to undermine the election. And white supremacists, Proud Boys, and other miscreants all over the country are now finding themselves on the wrong end of law enforcement just days after they ran roughshod over the Capitol Police. It is clear – at least in the short run (we Americans tend to have very fleeting memories) – that the biggest losers of last Wednesday’s events were the soon-to-be ex-president, Josh Hawley, Ted Cruz, and the right-wing social media website Parler. And although there were no winners in the melee, there is someone who escaped the worst of its consequences.

Voting for the 2021 class of the Major League Baseball Hall of Fame ended on December 31st. As such, all ballots had to be submitted six days prior to the (attempted) coup. Six days before the Confederate flag was carried through the Rotunda. Six days before a man wearing a “Camp Auschwitz” sweatshirt and a man wearing a “SMWE” t-shirt strode through the halls of U.S. power without a care in the world. Six days before “Murder the Media” was scrawled on a door inside one of the most sacred buildings in the United States. In short, six days before any and all of these bilious acts would have, could have, (potentially) should have impacted the Hall of Fame candidacy of one Curtis Montague Schilling.

Over the past few years, Schilling – even more so than Roger Clemens and Barry Bonds – has become one of the most difficult Hall of Fame votes for members of the Baseball Writers Association of America. The PED candidates may be polarizing – did he or didn’t he? does it matter? – but Schilling has truly brought the rarely-ever-used-prior-to-Mark McGwire “character clause” into specific relief.

When Schilling’s name first appeared on the ballot in 2013, be received 38.8% of the vote (if I didn’t know better, I would think ol’ #38 pre-ordained that total). He fell to 29.2% the next year, bounced back to 39.2% the next, before jumping to 52.3% in 2016, slowly making his way to 70% last year. Schilling only has two more bites at the apple – this year and next – to get to the requisite 75%. But only one player in the history of HOF voting has ever received 70% of the vote with time remaining and not been inducted (don’t feel bad for Jim Bunning, he was later elected by the Veteran’s Committee).

It is possible that Schilling’s performance on the field is sufficient to move the needle despite his words and actions off of it. It is quite possible that his 11-2 playoff record, with a 2.23 ERA, 0.97 WHIP, and nearly 6-1 K-BB ratio, combined with four complete games, two shutouts, an NLCS MVP, a World Series MVP, and three rings to his name are enough to push him up and over 75% either this year or next.

It is possible that as the ranks of worthy names on the HOF ballot thinned, enough members of the BBWA would at last check the box next to Curt Schilling’s name.

It is possible that enough writers have taken issue with the selective and moralistic exercise of the “character clause” (that was hypocritically implemented by Kenesaw Mountain Landis, the racist former commissioner of baseball, who history now reviles to the point where his name has been taken off the MVP trophy) that they would hold their noses and vote for Schilling because he was one of the sport’s all-time great pitchers.

But, if Schilling’s name appears on at least 75% of the ballots this year, it just may be due to the luck of the calendar. If the BBWA required ballots to be submitted by, say, January 7th, I can imagine a drumbeat of writers chasing their mailman down the street like some rabid, remorseful, and regretful Orel Hershiser1, Bill Madlock2, or Greg Maddux3.

Just one week, that is all it would have taken. Does anyone honestly believe that with what transpired at the Capitol, that 75% of the BBWA would have voted for a man who retweeted this: 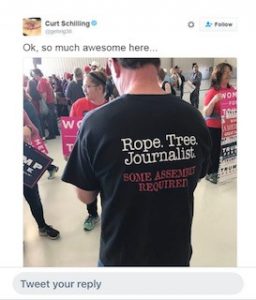 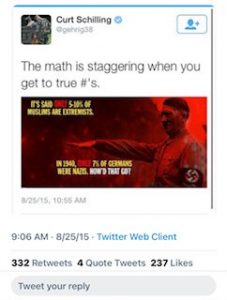 Or a man who was, as Jay Jaffe pointed out in his FanGraphs piece on December 28th , “…as of last week…promoting election conspiracy theories and calls for martial law on his Twitter account, not to mention comparing the nation’s top infectious disease expert to a Nazi…”

But that wasn’t enough. After the siege in Washington, and maybe just to rub the noses of those who voted for him a week earlier, Schill tweeted the following: 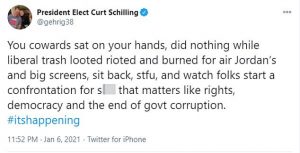 Do we believe that in the hours after the darkest day in our nation’s capital, the first time since 1814 it has been attacked, and attacked by people espousing all of the same beliefs that Curt Schilling not only holds, but shouts into every microphone – electronic or otherwise – that he can find, that the BBWA would still have voted for him? When Twitter banned Donald Trump; when Amazon stopped hosting Parler; when cabinet members resigned; when the 25th Amendment was openly discussed; and when the nationwide hunt for hooligans continued unabated? Does that seem like an environment for writers who previously chose not to look the other way, for writers who said – by their words and their votes – some bridges are simply too far, for writers who were looking for a reason not to include Curt Schilling on their ballot, to change their minds? If only the vote had been one week later, we know at least Steve Buckley would have had a different ballot.

Curt Schilling is a lot of things – a racist, a gamer, a homophobe, a clutch pitcher, a failed businessman, a Lou Gehrig aficionado, and a plain old asshole. But if his name appears on 75% of the Hall of Fame ballots when the results are revealed on January 26th, we can add “one lucky son-of-a-bitch” to the list.

With the House of Representatives impeaching President Trump for a second time; with Republican lawmakers facing denunciations from their hometown newspapers and, more importantly, their benefactors; with domestic terrorists being arrested; with cronies and acolytes running for the hills; wouldn’t it be a sad but ironic capstone to this whole sordid affair if Curt Schilling was the one person who avoided any repercussions.