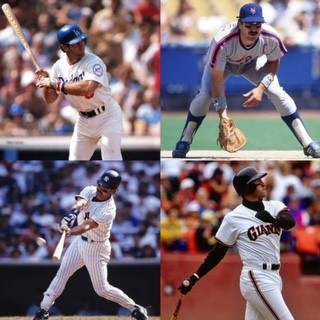 There is a belief that your baseball fandom hits its stride between the ages of 12 and 14. That certainly holds true for me. And luckily for me, as a bats-left/throws-left first baseman, I hit my fandom stride in what I would call the “Silver Age” of first basemen. Why not the Golden Age? Because as good as the collection of first-sackers listed below are, I’m not sure they live up to an era that had Lou Gehrig, Jimmy Foxx, and Hank Greenberg.

Here is a non-comprehensive list of the veritable super-stars who held runners on base in the eighties:

Pete Rose: 4,256 hits; played for 24 years. Only not a Hall of Famer due to that pesky gambling thing.

Wally Joyner: I already dedicated a whole article to him here.

Mark McGwire: Even before his goatee and biceps grew, he set a major league rookie record with 49 HRs in 1987. Would be in the Hall of Fame today but for Andro, Deca-Durabolin, and Winstrol.

There are four very obvious names not listed above, all of whom hold a very special place in my heart; all of whom were cornerstones of ‘80s baseball:

My inaugural first-baseman’s mitt was a Rawlings Keith Hernandez model.

Before the Batting Stance Guy ever struck his first pose, I closed my stance and dropped the head of the bat over my shoulder – and even removed my batting gloves – just like Will Clark.

My first baseball coach was a diehard Yankee fan. The only thing we could agree on was that Don Mattingly was the best hitter in the league.

Steve Garvey defied what I looked for in a first baseman – he batted and threw (I use that word loosely) right-handed – but he was my hometown guy; and he played every…single…day; and he could stretch like a Russian ballerina, and picked every errant Bill Russell throw.

These guys were not only good, they were great. As such, each year, when Hall of Fame balloting comes around, all four get a ton of attention. There are some who will swear that if Player X is in the Hall of Fame, so too should Garvey. Others will say that Mattingly was well on his way, but a bad back thwarted his potential enshrinement. Some claim that cocaine slowed Hernandez down. As for Will, well, he’ll always be a Hall of Famer…in my heart, if not in my head.

But the truth is, despite their greatness for periods of time, and despite my unrequited love, none of these four guys had Hall of Fame careers. Sure, that can be a subjective analysis (ahem, Harold Baines, ahem), but the facts and the stats bear this out.

Each player included at www.baseballreference.com has a “Hall of Fame Statistics” section, which lists the following:

Black Ink: This is how many times the player led the league in “important” stats. Accordingly, you get four points for leading in HRs, RBI, and/or batting average; three points for runs, hits, and/or slugging; two points for doubles, walks, and/or stolen bases; one point for games, at bats, and/or triples. The average Black Ink points for a Hall of Fame first baseman is 27.

Gray Ink: This is the same as Black Ink, but the player need only be in the top ten of the league. The average Gray Ink points for a Hall of Fame first baseman is 144.

WAR: This is also known as bWAR, and it is Baseball Reference’s calculation to determine how much better a player is than a player that would typically be available to replace that player. I will save you the headache of explaining how they do this.

JAWS: This is the preeminent tool for determining if a player is Hall-worthy. The sabermetrician Jay Jaffe first developed this system in 2004, comparing players at each position with players already enshrined, using advanced metrics to account for the wide variations in offensive levels throughout the game’s history. The JAWS score is a player’s career WAR averaged with his seven-year peak (not necessarily consecutive).

With that as the backdrop, let’s dig into the numbers.

As you can see from the above metrics, none of these guys meet the criteria necessary to have plaques in Cooperstown. And despite the oft-heard “Garvey was a Hall of Famer” (on the field and in the bedroom), it appears that Keith Hernandez has the strongest case to ultimately be enshrined. His WAR is only 8% lower than the average; his 7-Year Peak WAR is within the margin of error; and his JAWS score should be close enough for government work (especially for a guy who played and now broadcasts in New York).

What is incredible about these numbers is that you would have sworn that for at least a seven-year window, both Don Mattingly and Will Clark were the best hitters in the world. And yet, the statistics belie that memory. I guess that is just nostalgia of my youth. Chuck Klosterman, the best-selling author who always has an interesting way of looking at things, recently said the following: “Nostalgia is looking at the past through the lens of your own personal experience and therefore changing the meaning of that memory based on the way you want to feel about your relationship to your own life.”

In my own life, I want Garvey, Hernandez, Mattingly, and Clark to be inducted into the Hall of Fame. In real life, they were good; they were, in-fact, great. They were part of the Silver-Era of first basemen. But try as I might, I cannot conjure them into being Hall of Famers. And, you know what, my memories will suffice.

Hernandez’s mad-dash charge of a bunt.

Will the Thrill’s bat drop/arm cock as he launched another one into the upper deck at Candlestick. 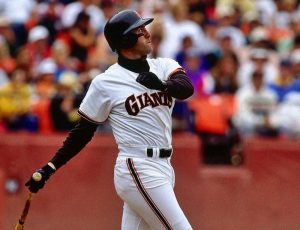 Who needs plaques when I have those images burned into my brain.