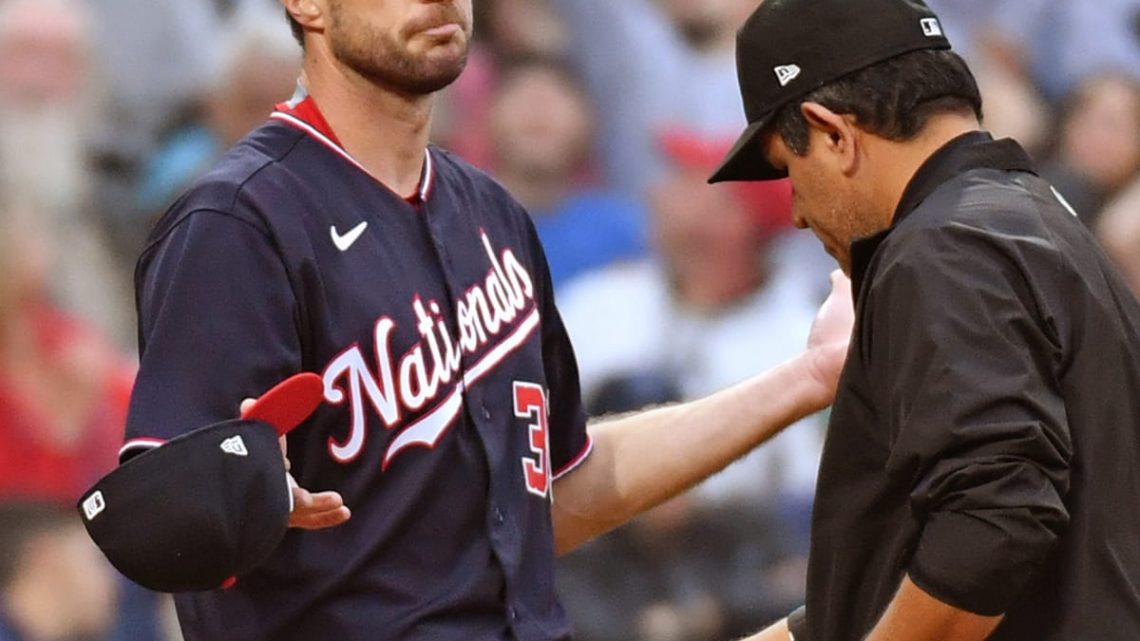 One of my best friend’s favorite thing to say is “What are we doing?” I have thought about that expression often the last couple of weeks with respect to MLB umpires turned TSA agents ferreting out illegal substances. By now we have all witnessed the Max Scherzer interrogations as well as the Sergio Romo striptease, and, of course, the Shohei Ohtani giggle-fest with the boys in blue. We know that the Mariners Héctor Santiago became the first victim of this new “sticky stuff” enforcement regime. But, really, what are we doing?

Santiago has already appealed his suspension, claiming his glove contained only sweat and rosin. And truth be told, what schmuck would load up with anything illegal the first week of spot checks? Scherzer, after Joe Girardi specifically asked the umpires to check him, said it best: “I would be a super fool to use something [that day].” This all begs the questions: Since when did umpires become scientists? Since when do they have the requisite knowledge and training to determine rosin + sweat is different than rosin + Bull Frog? Sure, a lump of pine tar on Michael Pineda’s neck is an easy call. Stevie Wonder could find a piece of sandpaper in Kevin Gross’s glove. It didn’t take the Hubble Telescope to spot the emery board flying out of Joe Niekro’s back pocket. And maybe Spider Tack is easy to discover – that shit makes Gorilla Glue look like Elmer’s. But we are now living in the gray area where pitchers may or may not be cheating, and – by rule – we have appointed the umpires judge and jury.

After his ejection last week, Santiago’s glove was confiscated and deposited into a plastic evidence bag for the guys at CSI Park Avenue to analyze. But why? As Jesse Rogers of ESPN reported: “Per source, the league didn’t need to inspect Santiago’s glove any further. The ejection and discipline are based on the umpires’ report of having detected a foreign substance.” So, why don lab gloves and radioactive tongs and make a show of taking the mitt out of play? Once they determined there was “sticky stuff,” they could have tossed Santiago – setting up his eventual 10-game suspension – and let him go to the clubhouse with at least his glove, if not his dignity. The rest of the performance was simple frippery.

Santiago, like Scherzer and Romo before him, denied any wrongdoing. And for the reasons articulated above, I tend to believe them all (but check back in a month or two when the inspections have become more lax). But what I find comical about this entire drill is that it is always the same: pitcher leaves the mound, umpire checks his hat, his glove, and his belt, and off he goes (well, not Santiago). Are those the only three places a pitcher might hide an illegal substance?

Buster Olney reported in the lead up to this new investigation routine that umpires were going to use scouting reports on different pitchers to check them for their specific tendencies. That is what Girardi was getting at with Scherzer – claiming that on all other nights Scherzer never touched his hair, but on this night he touched his hair, so obviously he was hiding something on his follicularly-challenged head. But outside of that one inspection, the umpires largely have stuck to the big three locations.

I was at a game in Cincinnati last weekend, and a Braves pitcher went behind the mound and bounced the rosin bag on his hand. He then adjusted his pants right above the ankles. The whole thing may have been totally innocuous. Or, he may have had some unlawful compound on his leg. We will never know. As this was happening I said to my son, “Let’s see if the umpires check his pants at the end of the inning.” Sure enough, the third out was recorded, and the umpires checked his hat, his glove, and his belt. The pants – which he touched immediately after loading up with rosin – were left uninspected. Which led me to ask: “What are we doing?”

It is my sincere hope that the June 15th memo, and the June 21st commencement of inspections, was a “scared straight” plan of attack. MLB is hoping that players, knowing that the Rule 6.02 (c-d) is now being enforced and suspensions are forthcoming, will stop the practice. If that was the wish, it seems to have been fulfilled. In the period between the day that word leaked that the hammer was about to fall and the day that umpires actually pulled out their science kits, spin rates dropped 22rpm for four-seam fastballs, 42rpm for sliders, and 47rpm for curveballs; strike out rates dropped a full percentage point; and batting average rose about six points (which seems small, but is actually a huge jump league-wide in a few short weeks). And since enforcement began, those rpm numbers have dropped even further and batting average has gone up another two points.

But since there have been countless inspections and only one (alleged) culprit, the current system of checks and re-checks is nothing more than Kabuki theater. If they really want to catch some culprits and end this endemic violation of the rules, the umpires should begin spot-checking different pitchers during random innings and in varied uniform and equipment locations. The pitchers can and should know that the “sticky stuff” highway is heavily patrolled, but they shouldn’t know behind which bush Smokey is hiding, and they certainly shouldn’t know what part of their person or equipment will be searched. Do that, and pitchers will have something to fear and a reason to not use the banned substances; do that, and teams will be disinclined to continue their never-ending quest to gain a competitive advantage (rules be damned); do that, and we will finally have some true law enforcement.

Otherwise, what are we doing?

p.s.  For more about this topic, and much, much more, tune in to the IBWAA Podcast.