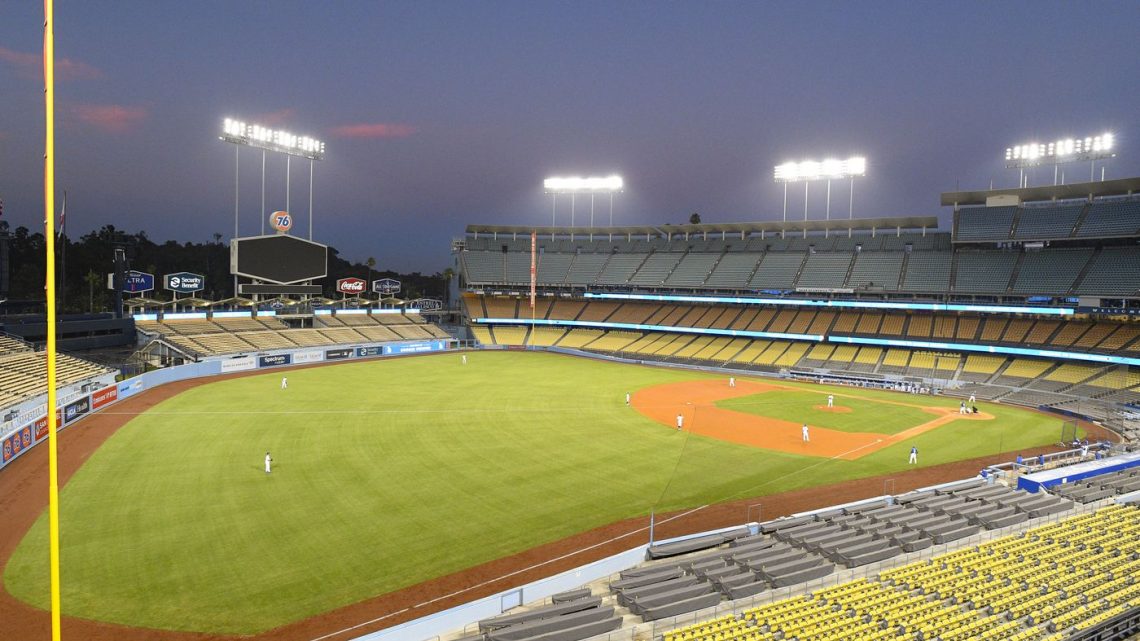 Fan(less)tastic Finishes: What We Will Miss This Post-Season

A few days ago, for the first time this year, my son and I went to Dodger Stadium. Unfortunately, it wasn’t for a game or to ridicule the Astros. It was just to get a Covid test.

I simply cannot remember going this long without watching a baseball game in person (which makes me kick myself for not venturing to Spring Training before everything shut down). But, alas, even though Rob Manfred is opening the gates in Arlington, I would need to buy both plane and playoff tickets in order to attend any baseball games in 2020. At this point I would put the odds at 30/70.

When the season started and certain teams populated their parks with cardboard cut outs, I was immediately on board. Putting aside the fact that a group of comedy friends bought one for the late Brody Stevens so he could posthumously represent the “818” at Dodger Stadium; and putting aside all of the great stories about family members getting to watch another game (or season) with a loved one, having “bodies” in the stands lent some dimension to the viewing experience. Having the “people” there made the ballparks look less empty, less cavernous, less lonely. But, the truth of the matter is that stadiums across the country were lonely this summer (just ask the play-by-play guys who broadcast away games from the press box in their empty parks). And that got me thinking about the impact of having insentient facsimiles rather than living, breathing fans in the stands.

Sam Miller of ESPN recently wrote an incredible article about the actual, real life impact of having patrons at the game, including the extra distance David Freese’s ball may have traveled in the ninth inning of Game 6 of the 2011 World Series due to the ambient heat of 43,000 fans. But I have a different angle: would the moments that we so cherish have the same resonance if they happened in sterile ballparks rather than ones foaming with fanatics?

Sure Willie Mays’ catch in the 1954 World Series is an all-timer, but few of us actually saw it happen live. Is part of that memory more endurable because the camera caught a shot of these guys:

Imagine if Kirk Gibson hit his home run in the 1988 World Series into a poster board rather than a screaming hoard of Dodger bleacher bums? Go back and re-watch the full the nine-minute video and try to imagine the entire at bat happening in silence. But more than that, would this be the top-rated moment in Los Angeles sports history if Vin Scully didn’t turn off his mic for an astounding, stupefying, glorious 68 seconds (start at the 6:47 mark) and allow the roar of the crowd to carry Gibby and us – viewing at home – around the bases and back home again?

Piggy-backing on Sam Miller’s article, does anyone honestly believe that the 55,000 screaming patrons in Shea Stadium on the night of October 25, 1986, didn’t have any effect on Calvin Schiraldi? Do we think that Bob Stanley wasn’t at least a little rattled by the cacophony in Queens? Does Rich Gedman get crossed up on mediocre fastball if the park was so quiet that the players could hear Jason Gay pecking away on his laptop? (Ed. Note: Jason Gay was 16 in 1986, and most likely wouldn’t have had one of the first mass-market laptops, but you get the point.)

Is our memory of #755 made more indelible by the image of two white men chasing down a black man as he rounds second base after receiving too many death threats to count, after being provided FBI protection for him and his children, after breaking the most hallowed record in the game? Those two fans added to the relief then anxiety and then relief again of the moment. Not true if that had happened in an empty Fulton County Stadium.

Reasonable minds might differ about the distance of Jose Bautista’s bat flip/throw in the 2015 playoffs. But at least part of his reaction had to be attributable to the nearly 50,000 Fosters-induced Canadians losing their minds on contact. Bautista may have been fired up in a desolate Rogers Centre, but certainly not *that* fired up. That said, Fernando Tatís, Jr. did a pretty fair impersonation last night in an empty Petco Park, so who knows?

In the aforementioned Miller article, he makes reference to Mariano Rivera throwing over to first base only three times in Game 4 of the 2004 ALCS; and how, with no fans in attendance, pitchers are now more willing to throw over four times or more. Did New Englander’s lusty boos keep Rivera from doing so, as Sam posits? Did the energy of the crowd give Dave Roberts that tiny extra bit of adrenaline to beat a ridiculous pop time and throw from Jorge Posada to keep an 86-year curse at bay by a fingernail? Could the players have pulled that same rabbit out of their hats in a silent Fenway Park at 1:22am and then again less than 22 hours later? This lifelong BoSox fan is dubious. Would Mark Bellhorn’s dinger in Game 6 even have been reviewed if it hit off a cut-out rather than a lurching fan? Is a huge chunk of our collective memories of those final four games enhanced because of the insanity of the Fenway faithful and the silence of the Bronx zoo (especially after Johnny Damon’s grand slam in Game 7)?

Did the sight of 55,000 white “Homer Hankies” flying around under the white roof of the Metrodome have any impact on our memories of the 1987 and 1991 Twins? Do the fans behind the outfield glass make Kirby Puckett’s Game 6 catch any more of a Web Gem?

And no list of this sort would be complete without asking about an eighth inning foul ball in Game 6 of the 2003 NLCS. With no fans in attendance, we would be able to answer the to-date unanswerable question of whether or not Moises Alou would have caught Luis Castillo’s pop fly. But assuming he couldn’t (some might say that is a fair assumption), our memory of that game, and the ensuing collapse (looking at you, Alex Gonzalez), and the following twelve years of futility, are forever altered by the fact that there were fans in the Friendly Confines on the night of my 31st birthday.

This recitation could go on and on (and I am sure you all are thinking of a few moments right now), but it will not for 2020. Regardless of how many people Manfred allows into the giant Costco that is Globe Life Field (it looks like it will be 11,500), it will not be comparable to having rabid fans rooting on their hometown team in the late innings on a cold October night. It will be antiseptic, it will be hollow, and it just won’t be the same. And, potentially, neither will the outcomes.

And yet, we will still watch.