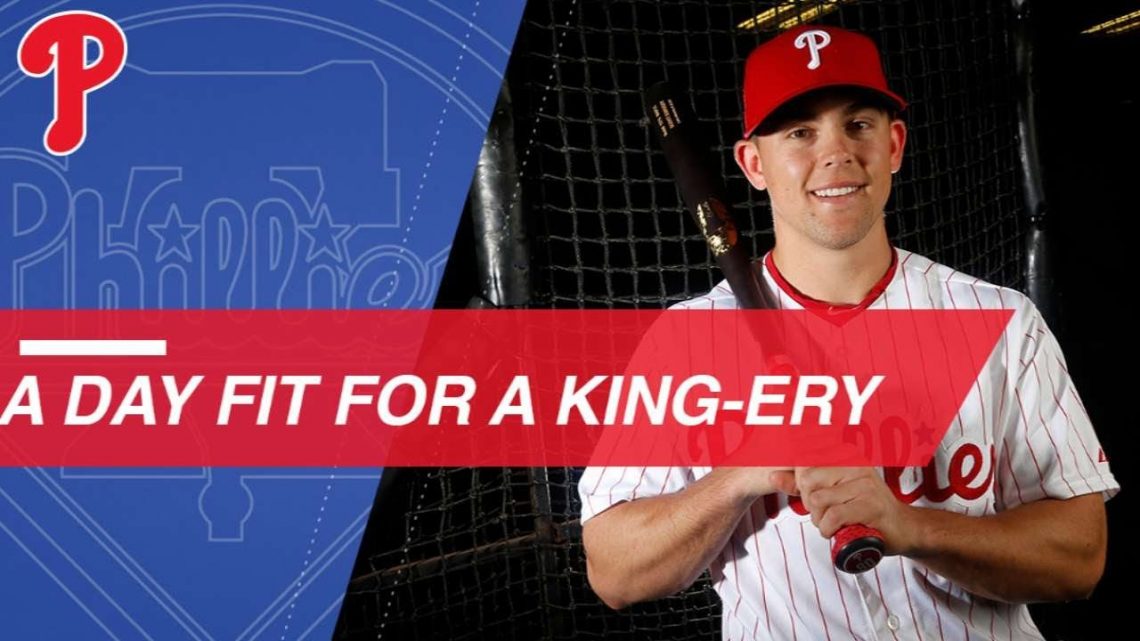 A Deal Fit For a Kingery

We begin our tale as Spring Training was winding down. The Phillies multi-faceted prospect Scott Kingery was preparing himself to head down to Lehigh Valley for Triple-A opening day. For various reasons – more on those below – Kingery didn’t think he would be breaking camp with the big club.

Kingery was a drafted in the second round in 2015 out of my alma mater, the University of Arizona. At 5-10/180, Kingery came into professional baseball playing multiple positions, with a great hit tool and plus speed. At his size, no one expected him to hit for power. But last year, Kingery hit 26 homeruns, stole 29 bases, and had a .889 OPS across two Minor League levels. Such production allowed Kingery to rise quickly up the ranks of the Baseball America and MLB prospect charts. And yet, no one expected young Scott to be wearing a Major League uniform on March 29th.

Kingery came to Florida in March and knocked the ball all over the yard. He hit .411, with 5 dingers and a 1.226 OPS during the spring. And yet, even with that performance, no one expected young Scott to be in the Majors on Opening Day.

As previously discussed here and elsewhere, even if the Phillies wanted Kingery with the big club, they had a financial incentive to keep him in the Minors for the first few weeks of the season. By doing so, the Phillies would delay Kingery’s service-time clock, giving the club an extra year of player control. In short, the Phillies planned to purposefully make themselves worse for a short period of time (three or four weeks) in order to potentially save some money six years down the road. The merits of this practice have been openly debated in many fora, but until the players change the CBA, teams are incentivized to take advantage of the rules, and disincentivized to bring young players to the big leagues – even when they are ready (see, Trout, Mike; Bryant, Chris; Acuña, Ronald; etc.). That, however, is a discussion for another day.

So, in order to avoid this “lose-lose-maybe we win some time in 2024” proposition, Klentak and Kingery’s reps at PSI Sports Management elected to negotiate a long-term contract for a youngster who had never played a Major League game. The Phillies and Kingery agreed to a deal that potentially runs for nine years, worth no less than $24M, and possibly as much as $65M (if the team exercises its three options). Here is an overview of the deal:

Why would the Phillies do that? And why would Kingery?

From the Phillies’ perspective, this was a no-brainer. If everything goes sideways, and Kingery is an all-time bust, they have a player on their roster through the 2023 season at an AAV of $4M. If you consider that the going rate for Wins Above Replacement (WAR) is $11M, Kingery could be a .06 WAR player for each of his six seasons and the Phillies still break even (Note: this math does not account for the price/value of WAR going up between now and 2023, which means Kingery could be even worse and the deal would still make dollars and sense).

And if Kingery is the real deal, the Phils have him under control for nine years at an AAV of $7.2M, which would rank him as the 180th highest paid player in the league (at current levels). To take this to its illogical conclusion, using 2018 values, if Kingery is worth exactly $15M (i.e., making him a 1.4 WAR player) in his ninth season (which begs the question as to why the Phillies would continue to exercise their options, but bear with me), the contract would still be a good value. If Kingery’s worst case is that he turns into Trevor Story or Max Kepler – by Year 9 – the Phillies will have won the deal.

One last thing: the Phillies got to bring Kingery, his wheels, his Swiss Army knife versatility, and his promise to the big leagues on Opening Day. They got a young ballplayer his baptism by fire, with a chance to help the club right away; he didn’t have to languish in the Minors, waiting for the sands in the hourglass to run out before getting “the call.”

So now we know why the Phillies would sign this deal, but why would Kingery? Why would a player with future “star” (if not “superstar”) written all over him give away not some, but all, of his negotiating leverage – three years of arbitration and three years of free agency – for a deal that, as shown above, is most likely way below market? One thing is certain, the MLB Players Association tried to talk him out of it. But the MLBPA doesn’t get to balance Scott’s checkbook or plan for Scott’s future (the MLB Pension notwithstanding, which kicks in if Kingery plays 43 days in the Majors).

Kingery was set to start the season in the Minors, and earn about $2,150/month. By signing this deal, he gets a first-year salary of $1 million, or $166,666/month (players are paid over a six-month schedule). A pretty nice raise. Sure, Kingery probably would have been in the Majors by May, and thus would have received the MLB minimum ($91K/month) for the remainder of the season. But that total salary would still be less than 50% of what he will make this year under the new contract.

What about Evan Longoria, people are yelling from the empty bleachers at the Trop? For those of you who don’t recall, Longoria signed a 6/$17.5M deal in 2008 after playing only six games for the (then) Devil Rays. Longoria protected himself with life-changing money, and played well enough to garner another 6/$100M deal four years later. Sure, Evan left a lot of money on the table by giving up three years of arbitration eligibility, but he still stands to make roughly $150M over the course of his career. That’s nothing to sneeze at.

To those screaming “Longoria”, I (and maybe Kingery, too) would scream “Singleton.” In June, 2014, Jon Singleton, a first base prospect in the Astros’ system (the third best prospect in the organization) got the call, and elected to sign a 5/$10M deal before he even put on his jersey. Singleton hit .168 in 95 games with the Astros in 2014; and .191 over 19 games in 2015. And that, my friends, is the sum total of Singleton’s Major League career. Singleton would have made a prorated MLB minimum over those two seasons, or about $320,000. By signing that contract – by mitigating his risk – Singleton made more than 30 times what he would have made otherwise. He protected his family and his future by signing early. If he not signed, do we believe that the MLBPA would be helping with grocery money today?

Had Singleton lived up to his potential, he may have been in line to be compensated like another Astros player who signed a similar contract a year earlier. A light-hitting second baseman secured his retirement by signing a 4/$17M deal in 2013. He then outperformed the deal, won some batting titles and an MVP, led the Astros to a World Series championship, and this off-season Jose Altuve was rewarded with a 5/$151M contract. But those riches were but a pipe dream in 2013 for a guy who, in 2006, had to sneak himself into a second tryout with the team. Altuve had no way of knowing that nine figures awaited him, so he took the sure money, and then earned the rest.

Other players, including Mookie Betts, Bryce Harper, and the aforementioned Ronald Acuña, have all been offered long-term deals at team-friendly prices, only to bet on themselves. And that is their right.

We think we know these players, but we don’t. We don’t know their financial situations; we haven’t run around the bases in their cleats; we don’t know what motivates, drives, or frightens them. None of us – not the yahoos sitting in the stands, the MLBPA officials in New York, or even teammates in (theoretically) similar situations – can pass judgment on any other human being who accepts an offer of generational money, an eight-figure fortune – with no guarantee that any more will ever be available – just for the privilege of playing a kid’s game in a park six months of the year.

Not to be overlooked is the dearth of free agent signings this off-season. Was this year merely a blip on the radar, a bump on the road to riches; or was it a sign of the times? Many players (Jose Bautista, Melky Cabrera, Andre Ethier, Matt Holliday, John Lackey, Brandon Phillips, Mark Reynolds, Jayson Werth, and more) found this year’s free agent waters quite choppy, and, as of today, only a few have found buoys. Maybe Scott Kingery looked to the horizon and didn’t like the view. Maybe he chose safety and security over luck and the lottery.

As a baseball fan, I hope Kingery lives up the contract, becomes a star, and signs a massive deal the next time around. But on the off-chance that he flames out and finds his name on the list of all-time flops, I will be happy for him and his family that, if nothing else, he has financial security and the ability to buy a round drinks while he regales everyone at the bar with his stories of what might have been.