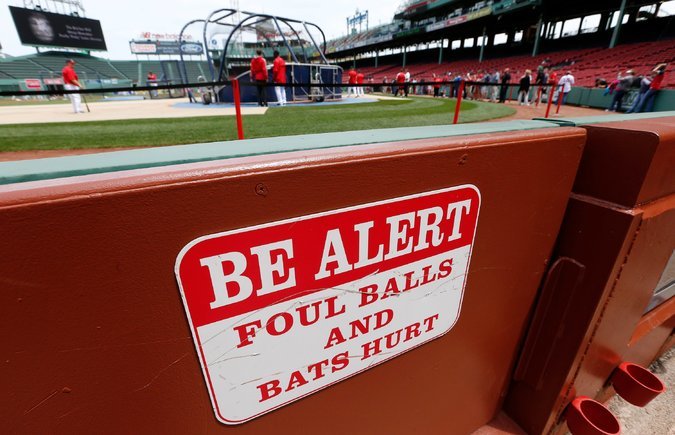 On Wednesday afternoon, Aaron Judge hit his 45th homer, which was followed by Gary Sanchez’s 32nd.  The Yankees cruised to a 11-3 win over the Twins, completing a three-game sweep and keeping the pressure on the division-leading Red Sox.

But the Yankees’ win was overshadowed by what happened in the seats behind the third base dugout in the fifth inning.  As I am sure many of you have seen by now, Todd Frazier rocketed a foul ball into the stands at 105 miles per hour.  The ball struck a young girl sitting with her grandparents.  Bloody and bowed, she was carried to the first aid station, and then transported to New York Presbyterian-Columbia Hospital. 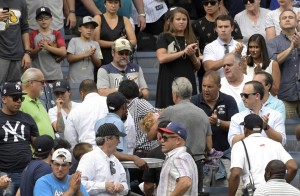 As of this writing, per her father, the girl is “doing all right”, but he could not (or would not) confirm whether or not she would need surgery for her injuries.

After impact, the game came to a halt.  Frazier, a father of two children under the age of the three kneeled in the batter’s box, shaken and concerned.  Twins’ second baseman Brian Dozier actually cried when he saw her hit by the screaming liner.  The game did not resume until the little girl was taken from her seat; she, the fans around her, and the players on the field, all the worse for the wear.

This horrific incident has, once again, brought the issue of protective netting back to the forefront.  And this one is an absolute no-brainer.  In fact, since just Wednesday afternoon, the Reds, Padres, and Mariners have all committed to extending their netting for the 2018 season.

Now, for those of you who have not followed this closely, here is a little primer: There are about 1,750 incidents of fans being hit by foul balls at Major League stadiums each season.  Put differently, in a typical season, every time Mike Trout gets a base hit, about 10 fans get nailed by a foul ball.

After the 2015 season, Commissioner Rob Manfred “encouraged” teams to extend their netting to the “near end of both dugouts”.  Let’s unpack that a bit.  Through the 2015 season, many teams only had netting directly behind home plate; and despite the rash of injuries from foul balls and flying bats, the best MLB could muster was a gentle prod that the netting be extended to the near end of the dugout?!?  In fairness, MLB did offer some guidance about extending it even farther.  Nothing was required.  In fact, the Commissioner was clear that he wanted this to be a “localized process”, with each team working with its own fan base to determine the best course of action for safety and enjoyment of the game.  What a bunch of hooey.

The truth of the matter is that baseball – and all of its teams – have been hiding behind the protective netting of a legal theory known as “assumption of risk”, and colloquially known as the “Baseball Rule”.  In short, fans come to the game knowing it is dangerous, and thus assume the risk that they may be hurt.  And for years, courts have upheld this doctrine.  But the times, they may be a changin’.

A few years ago an appeals court in Ohio reversed a lower-court ruling in favor of the Cleveland Indians in a fan injury case.  In Idaho, the state Supreme Court elected not to impose the Baseball Rule and allowed a fan at a minor league game (who lost an eye) to present his case to the jury.  A fan who was badly injured at – get this, Yankee Stadium – is currently in litigation with the team and the league regarding the fine print on the back of the ticket and this outdated legal theory.

Michael Moran, an Atlanta lawyer who has litigated these types of cases, previously stated: “The game is different now. Ballparks are configured differently than they were 20 or 30 years ago; the foul lines are closer to the stands. Pitchers throw harder. Batters hit the ball harder. All these things increase the risk.”

Are we to believe that even the most adroit fan can (and should) react to a ball that is on top of them in less than a second? If that were so, why would teams put netting in front of the dugouts?  Shouldn’t the best athletes in the park – individuals who are paid to pay attention and who don’t have the myriad diversions and distractions that are intended and encouraged for the fans – be prepared to avoid a foul ball or a hurtling bat?

The most common refrain from the teams is that fans don’t want to sit behind the netting.  Really?  The next time you watch a game and they show the centerfield camera angle, please pay attention to the dearth of fans sitting behind home plate (where there is netting in every park), and the masses sitting behind each dugout?  What, you say?  The seats behind home plate (except, ironically, at Yankee Stadium) are full; and fans have paid upwards of $1,000/ticket to sit there?  Now I am thoroughly confused.

I will acknowledge that fans find the netting a distraction…at first.  But then they get used to it.  I speak from experience, as I sit behind home plate, behind a net, and now barely notice it.  Don’t believe me?  Where do baseball executives and scouts sit?  People who are literally paid to watch and analyze the game do so behind the net; but Joe Six-Pack cannot enjoy watching Aroldis Chapman pitch through 3/16 of an inch of braided nylon?

Hockey harbored this same fear about their fans.  And then a 13-year old girl was killed by an errant hockey puck in 2002.  You know what they did?  They added netting around the goals.  And you know happened?  Nothing.  Attendance was, and remains, virtually unchanged on a year-to-year basis.

So here is what should happen.  After the 2015 season, the Commissioner asked the teams to do their own research.  Ostensibly, the Yankees did this.  And, ostensibly, they made a business decision that, by installing/expanding their netting, they would lose X dollars from fans who no longer wanted to sit between the dugouts.  That little girl’s family needs to sue the Yankees; and through discovery, obtain that analysis and determine the value of X.  And then a court should award damages equal to three times X.  The Yankees should lose all that they hoped to avoid losing, three times over.

The little girl should get the first X.  She is the Neil Armstrong, the Rosa Parks, the Jackie Robinson of ballpark safety.  She earned X with the damage to her tiny nose and her little eye.

The next X should go to a fund for all fans injured at the new Yankee Stadium since it opened in 2009.  By that time, everyone – including the Yankees’ brass – knew that seats closer to the field + insufficient netting = unnecessary and potential serious risk.

The final X should go to building and refurbishing baseball fields all over New York.  Show the kids of the Empire State that baseball cares about them, their safety, and their fandom.

And one last thing: the Commissioner must issue an edict – not a suggestion, not a recommendation, not guidance – but an actual rule.  Every team must install protective netting to at least the far end of each dugout prior to the commencement of the 2018 season.  Each team that fails to do so is fined $1 million per game until the same is properly installed.

We have big, complicated, unwieldy problems in this country.  Fans having to worry about their life being altered/in jeopardy in less than the blink of an eye while trying to enjoy America’s favorite pastime shouldn’t be one of them.