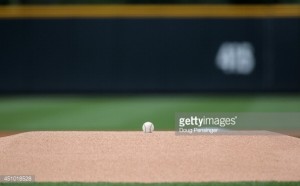 Before he took some flak for assaulting/accosting a fan the other night, Joey Votto took some flak for denying batting gloves to a kid sitting behind the dugout at AT&T Park.  Votto’s told the kid that he was sitting in the front row, he is elite, and didn’t need the swag.  We can debate the merit of the response, but it got me thinking about a related topic, which got me thinking about a related topic.

First related topic: At the end of each inning, the player who recorded the last out (or his teammate as part of some bizarre lob around the diamond ritual) is now ethically bound to toss the ball into a throng of awaiting fans.  Gone are the days when fans only clamored for a foul (or homerun) ball.  Now they want the result of a ground ball to short.  I have always thought this was the classic “rich get richer” situation, where people who can afford to sit in the best seats get – in addition to better views and better food – more souvenirs.

But what about the kid sitting in the upper deck, who maybe attends a single game per season, and is in the best seat her family can afford.  Why is she left out?  Wouldn’t it do more for the fan experience if it was less about the haves/have nots, and more about spreading the proverbial wealth to kids of all stripes?  Why couldn’t a player toss the ball to an usher who then randomly selects a cute kid in the cheap seats to be the beneficiary of Joe Panik’s toss to Brandon Belt?  This seems all too easy.

Which brings me to the second related topic: The lost art of the third out ball flip.  Now, I won’t get all sepia-toned nostalgic on you – or maybe I will – but the third out ball flip was one of my (and many others’) great joys in the game.  As a former first baseman, more often than not I found the ball in my glove at the end of an inning.  If I were a current Big-Leaguer, my only (?) joy would be in finding the right fan and hoping to guide the ball to her before some horse’s ass in a Jeter Sucks t-shirt bowls her over for a 5oz. piece of a horse’s hide.

But back in the day, having that ball in your glove opened up a world of possibilities.  There is and was the age-old, pedestrian roll back to the mound.  Some players (think Howie Mandel) might have been inclined to drop the ball directly from his glove onto the mound as he made his way to the dugout.  But there were so many other great options that all sorts of players (this writer included) took advantage of.  And, because only real weirdos like this stuff, there is virtually no stand-alone footage.  Memory will have to serve:

Pete Rose was known for his ball spike.  Johnny Bench would occasionally flip an inning-ending strike out back to the umpire.  Greg Maddux, he of the 900 lifetime non-strikeout outs, often had the first baseman flip the ball to him when he made the third out.  I still love that move.

If a team was in the first-base dugout, it was always cool when the first baseman flipped the ball to the opposing team’s first base coach.  Let him (a) chew on that last out and (b) figure out what to do with the ball.

When Will Clark would make a nice pick to his glove side to end an inning, he would allow his momentum to carry him such that he had an easy toss to the first base umpire.  Always a slick move.

Some catchers would play a game – now known as Mound Ball in the “new ball every half inning era” – wherein he would try to roll the ball up the hill hoping to have it stop at the rubber.  Man, it’s the little things . . .

Now, I will acknowledge that player approbation has won out over player artistry.   But if canvass is going to be ripped from the third-out easel, let’s at least get more fans in on the fun.  And if we can’t do that, can we at least mandate that every player, at least once per season, needs to do an “Andrew McCutchen”: