If you have ever coached a Little League game, you are all too well acquainted with pitch counts.  Have a kid throw more than twenty pitches, he can’t go tomorrow.  Ride him for 85, and he is “burned” for the next four days.  Ironically, as a coach, you are often more attuned to the total number rather than the quality of the pitches.  But, make no mistake, you know how many have been thrown (for both your team and theirs).

If you have ever coached in a travel ball tournament, you become locked in to innings limits.  A player touches the rubber and then walks off, it is the equivalent of an inning pitched.  These tournaments set very strict rules about the number of innings in a day and in a weekend.  We know for sure that their heart – if not their brain – is in the right place.

At some point after I stopped playing baseball (did these limits on kids exist before the aughts?), the powers-that-be at the lower levels of baseball made a conscious effort to save our kids’ arms.  Whoever “they” are, they figured out that parents and coaches (often one-in-the-same) could not be trusted to police themselves, so pitch counts began to be blared over PA systems, pitch logs required an attention to detail rarely seen outside of your local H&R Block, and what essentially amounted to affidavits were created for coaches to sign post-game.  League officials decided that there would be no torn UCLs on their watch!

Only time will tell if these safeguards actually worked, as the rules can never account for kids playing on multiple teams in multiple leagues with multiple sets of pitching rules, and for coaches with multiple agendas.  Hell, I know of a 12-year old kid who repeatedly threw more than 120 pitches (yes, you read that correctly) in different outings this past summer, but he was A-OK because he was under the innings limit set by the tournament director.  As Steve Martin once said . . .

So it is clear that we are at least trying to do something for the kids, but what about at the Big League level?  Starting in about 2000, in addition to the “Steroid Era”, baseball found itself dealing with the “Tommy John Epidemic”.  This was not a case of too many soft-throwing lefties descending Walking Dead-style on the league.  Rather, this was a rash of pitchers suffering ulnar collateral ligament damage in their throwing elbows, requiring an hour and a half surgery followed by a year and a half recovery. 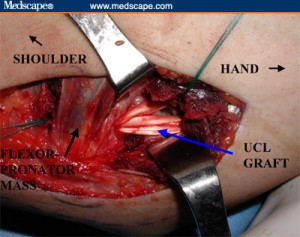 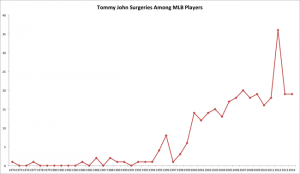 Considering the trend, teams decided they had to do something.  It took nearly a decade, but some precautions were finally implemented; and teams tried to incorporate some of this (in)sanity into their programs.

With the help of (a) the surgeons who perform the vast majority of these surgeries (why is it that we know the names Andrews and ElAttrache?) and (b) more and more data available because of more and more subjects, teams began to create post-surgery regimens for their players.  But, to be clear, there was nothing magnanimous about this; this was done simply to protect the teams’ investments.

However, as is so often the case, great intentions are the victim of poor planning and poor execution.  In an attempt to find something hard and fast to glom on to, teams began setting inning limits for their young pitchers.  (This was done for both pre-op (because, really, doesn’t every pitcher eventually have surgery?) and post-op players.)  Unfortunately, counting innings is, at best, dubious, and at worst, asinine.  There are many flaws with Little League Baseball, but one thing they got right was that they count pitches – not innings.  (See, 12-year old throws multiple hundred plus pitch games but remains under the innings limit.)

Over the past week, Matt Harvey and his “180 innings limit” has been the talk of baseball.  For reasons that are yet to be explained, Harvey’s agent – the indomitable Scott Boras – decided the New York media was the best place to play this all out.  Harvey vacillated, Boras pontificated, the Mets dithered, and the New York newspapers took them all to task.  Everyone came out of this looking worse for the wear (and, by the way, it still isn’t resolved).

But, just for giggles, let’s buy into the concept of innings limits for one minute.  I’m no math major, but if Harvey had truly been on a 180-inning limit from the outset of the season, that feels very much like 30 six-inning starts.  As the season progressed, and it was looking more and more possible that the Mets would play in October, it was well within the Mets’ control to skip four or five starts over the final four months, preserving Harvey – and his innings – for the playoffs.  Again, for reasons unknown, they did not do this.

But, you say, this is a case of first impression and they got caught off guard.  Well, then the Mets aren’t very diligent and Boras isn’t very bright.  Back in 2012, the Washington Nationals’ star/stud young pitcher, Stephen Strasburg (also repped by Boras) was coming off Tommy John surgery and was limited to 160 innings for the season.  The Nats could have restricted his innings per start; they could have skipped him in the rotation every so often throughout the season; hell, they could have “shut him down” for four weeks in July.  They did none of those things.  And, with twenty-four games to go, and the Nats in first-place, Strasburg’s season was over.

The Nationals made the playoffs and lost to the Cardinals in the NLDS.  Do you think having Strasburg in a series that went the distance might have been helpful?  Might better planning have put Washington in a better position to win?  Some might argue . . .

Which brings us back to Harvey, the Mets, and the fallacious concept of innings limits.  On July 4th, Harvey threw 100 pitches against the Dodgers – in 5 innings.  He threw 97 in 8 innings against Colorado on August 11th.  Utilizing the “innings limit” method, the Rockies outing was 60% more taxing on Harvey’s surgically-repaired elbow – even though he threw 3 less pitches.  On what planet does that make sense?  I simply don’t understand this.

What makes this even more frustrating is that teams, managers, and pitching coaches are fixated on pitch counts – on a per game basis.  Back in the ‘60s and ‘70s, no one cared how many pitches a pitcher threw in a given game.  Then, in the ‘80s, this became a fascination, with pitchers pulled in the 100-125 range, regardless of their effectiveness.  Don’t get me wrong, I am lot lamenting this ground shift, nor do I want to go back to the days when Nolan Ryan tossed a cool 235 pitches in a 13-inning no decision (!).  I am glad these “ounce of caution” efforts have been put in place, I just wish the brilliant sabermetricians who run the majority of teams these days would extrapolate those numbers over the season to have a better idea of the actual wear and tear their pitchers are suffering.

So here we sit in early September and the Mets are vying for their first playoff birth since 2006.  Matt Harvey has less than 9 innings left until he hits the artificial threshold of 180.  Do we think that will hold for the remainder of the year and on into October?  As Buster Olney correctly pointed out, this is like trying to make a cake for a party and not having enough flour – there just isn’t enough there.

However, despite the gallons of ink that have been spilled on this topic in the past week, despite the hundreds of trees that have been felled to make a case for or against the Mets, Boras, and/or Harvey, despite the thousands of gigabytes that have been utilized to analyze every pitcher in the history of the game who has come back too much/too soon after Tommy John Surgery, I am yet to read a single article, column, or tweet regarding the total number of pitches Harvey has thrown this season.  Am I the only one who finds that odd?

Oh, you are thinking, they don’t keep track of that.  Well, why in the same space of time have I seen and read various reports about the total pitch count this season for Dellin Betances and the entire Cardinals bullpen?  The truth is out there . . . if anyone cared to look.  Well, I did.

It turns out Harvey threw 2,697 pitches in 2013 and has thrown 2,533 this season.  So, by this count, Harvey should have another 164 pitches in the tank.  No one has mentioned that.  To be fair, that is probably only one additional start, but if Harvey is at 180 innings the last weekend of the season and they need him to pitch against the Nationals to secure the division title, that one additional start may become very important.

But let’s take this analysis one step further.  Many medical experts (including those at the American Sports Medicine Institute) claim that innings limits and pitch counts are somewhat irrelevant (for adults).  They state that the vast majority of injuries occur when a pitcher throws “past fatigue”.  So, when a pitcher gets tired, whether that is at 150 innings or 90 pitches, he should be pulled and not allowed back on the mound until the fatigue has passed.  How do you combat fatigue: rest.

This season, after a year and half of rehab to – ostensibly – make his arm stronger (with limited throwing and no MLB game action), Harvey has also made 26 appearances, throwing 171 innings, using 2,533 pitches.  But, and here is the huge BUT, he has only made 10 starts on four days’ rest, 10 on five days’ rest, and 3 with six days’ rest.  In short, he is considerably more rested this season than in 2013 (or, probably, than at any other time since he first picked up a baseball).  He, theoretically, should have less fatigue.  Ergo, he should be in a better position to pitch longer without risk of injury.

I am no expert, just a casual (okay, maybe not so casual) observer of the game, and I have figured this out.  Why can’t Sandy Alderson and the entire Mets organization, why can’t Scott Boras and the 60 employees of Boras Corp., why can’t the entire New York and national media, figure this out.  My head hurts.  This isn’t rocket science; it’s just sports science – and barely that.  People perform better when they have more rest.  The defense rests.

I wish someone in the Tri-State area would read this, stop being emotional, and start being rational.  So, at the end of the day, Matt Harvey can just . . .