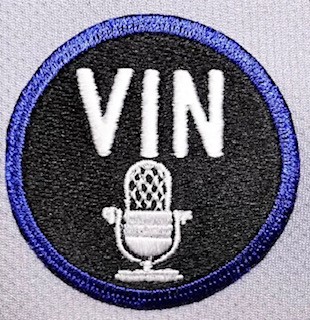 A lawyer friend called me the other day to discuss a deal. But before we got down to business, we had to deal with important matters. He wanted my thoughts on the trade deadline and the passing of Vin Scully. I offered a few bromides about the Dodgers’ failure to land Juan Soto and then jumped into my feelings about Vinny.

As a general rule, I try to find silver linings. And so I told my friend I had two thoughts about what was a very sad day for baseball fans in general, and Dodger fans/Los Angelenos in specific:

We are just so very fortunate to have this man’s greatest hits, his greatest moments, on audio and video that we can pull up any time we want a trip down memory lane. It is not often that we are afforded that opportunity – just ask anyone who has watched grainy Hi-8 videos of dearly departed loved ones. About a day after I shared this thought with my friend, Steve Rushin wrote the following (which, as to be expected, is brilliantly articulated):

In death, his voice doesn’t fall silent, for it lives on in endless recordings and in the eternal hereafter of YouTube. Indeed, now that Vin has joined the celestial choir—the analogies are apt for the Catholic boy with the golden pipes—his voice travels with him, as broadcast signals travel through space. Somewhere, someone in the firmament is always being wished a very pleasant good evening, courtesy of Vin Scully—St. Vinny of Wherever You May Be.

We, as baseball fans, are lucky to have had a five-and-a-half-year separation from having Vinny in our everyday lives. Had this death happened a few years ago, say, in the hours after Vin called another Dodgers-Giants game, such that he was here today and gone tomorrow, well, I don’t know how we would have reacted. I don’t know if we could have watched another Dodger game for the rest of the season. I don’t know how you have that essential part of your life – at least the lives of millions of Dodger and baseball fans who listened to Vin every night – ripped from you and not felt that loss at an emotional, visceral level. Had his death occurred this way, it is not hyperbole to say that the season may have been ruined.

Vin stepped away from the mic after the 2016 season, and that has afforded us our own mourning period. We were given the opportunity to meet and get to know Joe Davis. We have learned to watch and enjoy Dodger games without Vin – something we didn’t have to contend with for nearly 70 years.

In the many, many hours of reading, watching, and listening about Vin that I have consumed since Tuesday night, this one idea stood out to me: People born in the 1800s listened to Vin call games, and so too did people born in the 2000s. Sure, none of those nineteenth-century fans are still with us, but all of us would feel this loss that much more acutely if Vin had still been a day-to-day, night-to-night presence when it happened.

A MOMENT WITHOUT VIN:

Shortly after Vin retired in 2016, the Dodgers found themselves in an epic playoff battle with the Washington Nationals. After watching Clayton Kershaw save Game 5 for the Dodgers, giving them the NLDS title, I couldn’t have been more excited – for the Dodgers and for Kershaw. But I knew the moment was missing something. And, because I grew up in Los Angeles, and because I live here now, Vin’s voice and viewpoint are in my bloodstream; I can hear him calling a game, even when he is nowhere to be found.

So, this is what I wrote immediately after that game, and am republishing it today as it seems fitting to add to the canon:

THE CALL THAT COULD HAVE BEEN

*Editor’s Note: The words you will read below are what you might have heard when we came back from commercial Thursday night, starting as Clayton Kershaw finished up his warm-up pitches. As best you can, read this in Vin Scully’s voice.

Anyway, enough about that.

Daniel Murphy digs in and Kershaw comes set at the belt.

Fastball, up and in.

Whoa! So much for fatigue.

That fastball had a little extra something on it. In fact, I don’t think Kershaw hit 95 even once on Tuesday afternoon but, sure enough, fatigue is no match for adrenaline.

Kershaw stares in at Ruiz, shakes his head, once, now twice. Kershaw comes set at the belt, and the one and oh pitch is a fastball in on the hands; short pop on the infield, Culberson takes a few steps back, and just like that, Daniel Murphy is retired.

You have to wonder if Dave Roberts will go out and get Kershaw, having gotten the one man he was brought in to get.

Well, I guess we have our answer.

Roberts is staying put, and you get the feeling that it would have taken Roberts, Honeycutt, and a team of coaches to pry the ball out of Kershaw’s hand at this point.

So the chess match continues.

Well, fresh out of options, Dusty Baker has gone to the last man standing.

Wilmer Difo, the rookie shortstop, is Baker’s and the Nationals’ last hope.

Wilmer, from Santiago de los Caballeros in the Dominican Republic, made his major league debut on May 19th, and here he finds himself square in the eye of the hurricane.

Difo, a switch hitter, digs in from the right side against the left-handed Kershaw.

Fastball, WAY inside. Difo had to do a little dance to avoid that 93-mile-per-hour heater. Difo must be wondering how he got himself into this situation, and wondering if he can pull a Houdini and get himself out of it.

Kershaw is ready, Harper leads from second, and Werth off of first. Gonzalez is playing behind Werth, and Seager is bird-dogging Harper, trying to keep him close.

The 1-0 delivery is a fastball fouled away. And Kershaw has squared his account.

When you look out in the infield, Seager is doing his best to keep Harper from getting too big of a lead, hoping to keep him from scoring on a single.

Of course, with two outs, the runners will be off on contact. Harper runs pretty well and knowing the way Harper plays the game, there will be no holding him at third if the opportunity to score arises.

Here comes the 1-1 pitch, Difo swings through a 91-mile-per-hour slider. I tell you, that just isn’t fair.

Kershaw brings his hands high above his head, and slowly brings them down and settles at the belt. He takes a look at the runners, and the runners GO.

Difo dribbles it foul up along third, and the runners have to return from whence they came.

Difo had an extremely defensive swing on that pitch, and really, who can blame him? He is doing his level best just to stay in the box at this point.

You know this is the 167th game that each of the Nationals and the Dodgers have played this season; they have split the first two games of this series, and here we are in the bottom of the ninth inning of a one-run game. Folks, it doesn’t get much closer than this.

Kershaw has rubbed up a new ball and is now ready to go.

Difo digs in while Harper and Werth take their leads. The 1-2 delivery is a BREAKING ball in the DIRT, SWUNG ON and MISSED. Ruiz keeps the ball in front of him and guns it to Gonzalez covering first to complete the strikeout.

At 12:41 in the morning, East Coast time, the Dodgers have won the division series; and maybe, just as importantly, Clayton Kershaw has slayed his demons.

I tell you, folks, just when you think you have seen it all – you get Clayton Kershaw saving a game in which Dodger CLOSER, Kenley Jansen, threw nearly three innings and 51 pitches.

And, not for nothing, but the last time Kershaw, the three-time Cy Young winner, recorded a save – it came ALL the way back in 2006, in rookie ball in the Gulf Coast League. His catcher that day…Kenley Jansen.

Well, that’ll do it from the nation’s capital where the Dodgers have defeated the Washington Nationals 4-3 to advance to the National League Championship Series.

For Charlie Steiner, Rick Monday, and the rest of our crew, this is Vin Scully wishing you a very pleasant good evening, wherever you may be.”

RIP, Mr. Scully. You were a one of one, and every time we look up into that “cotton candy sky,” please know: