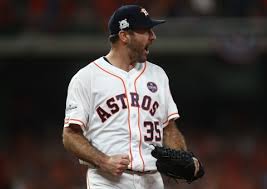 The Astros won the AL pennant on Saturday night.  A clean 4-0 victory over the one-season-too-soon Baby Bombers.  However, one pitch could have changed it all.

If you checked Sportscenter Friday night, you would have seen that the Astros beat the Yankees 7-1 in Game 6 of the ALCS.  “Wow”, you would have thought, “the Astros got their mojo back and blew out the upstart Yankees”.

But if you were watching the game, and specifically the 7th inning*, you might have an entirely different view on the matter.

As a quick reminder, the Astros won the first two games of the series, and led 4-0 in the 7th inning of Game 4.  The Astros were six outs away from a commanding 3-1 series lead, with Dallas Keuchel and Justin Verlander set to pitch the next two games.  In the space of less than two innings, that all came crashing down; the Yankees scored six unanswered runs, won the game 6-4, and then won Game 5.  And, just like that, the ‘Stros had their backs against the wall.

So when the Astros found themselves leading 3-0 in the 7th inning of Game 6, the ghosts of the Bronx had to be floating about the home dugout.  Verlander had been cruising – 75 pitches through six innings.  But he started the top of the 7th by walking Greg Bird on six pitches.  Two pitches later he had hit Starlin Castro.  Now the Yanks had the tying run at the plate with nobody out.

In case you haven’t been following, the Houston bullpen is a minor dumpster fire at this point.  It is not a Cubs-level conflagration, but it is smoldering.  So A.J. Hinch desperately wanted to get seven innings out of Verlander and just find a one-inning bridge to Ken Giles.  However, when Verlander started Aaron Hicks with three straight balls, things were not going according to plan.

I have previously written that the two-strike pitch is what makes me love baseball.  There is nothing like it in all of sports. However, it need not be a two-strike pitch that changes the entire complexion of a game – or a series. Sometimes, it is just one pitch. And in Game 6 of the 2017 ALCS, we saw that one pitch, over and over again.

Two on, no outs, a 3-0 count to the batter representing the tying run. If Verlander throws one more ball, the bases are loaded for the Todd Father, who has had a career resurgence – just in these playoffs. Verlander throws a strike down Main Street. But we are still dealing with one pitch. On 3-1, home plate umpire Jim Reynolds calls on a strike on what is clearly a ball (see pitch #5 above). Rather than loading the bases, he loaded the count. What happens if that call is made correctly?

Now we have one pitch writ large – it is now a two-strike pitch. So what does Aaron Hicks do, he fouls off four straight. On the tenth pitch, and by my count, the seventh one pitch, Hicks strikes out swinging. But we are hardly out of the woods.

Verlander is clearly tiring. He is now up to 93 pitches (and 217 over his last two appearances). Verlander’s second pitch to Frazier is rifled to dead-center. George Springer makes a leaping catch against the wall to, in my estimation, save the season. If that ball lands, the score is 3-2, and the Yankees have the tying run in scoring position with one out. And, if that shot turned into a double, Hinch has no choice but to go to his leaky bullpen. Shades of Game 4 all over again.

But that one pitch is turned into the second out of the inning. Verlander then starts out the #9 hitter, Chase Headley (who already had two hits on the night), with two balls. And here we go again. The next pitch to Headley is one pitch that can change everything. As of 2016, batters hit .282 on 2-0 counts; and that jumps to .301 on 3-0 counts. As a general rule, hitters “love to hit 2-0”. Headley took a 2-0 slider at the upper end of the zone for strike one. With the count 2-1, batters hit .247, and Headley was no different, grounding to Jose Altuve to end the end inning and end the rally.

Verlander was done after throwing seven scoreless innings, giving up five hits, and striking out eight. He threw 99 pitches. However, he threw one pitch at least 9 times. Had that one pitch gone differently in any of those nine chances, it is quite possible that Verlander’s effort would have been wasted, and in all likelihood the Yankees are the AL Champions, prepping for a rematch of the 1977, 1978, 1981 World Series.

*The 3-0 slider to Gary Sanchez with two on and two in the 6th inning may be the subject of any entirely different article.