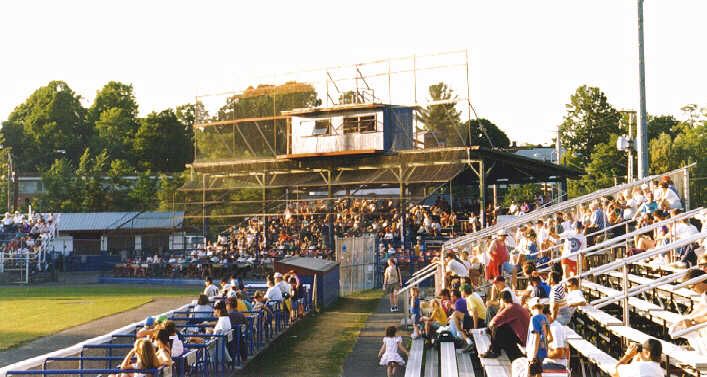 THE JOY OF OWNERSHIP

So you want to own a baseball team?  Who doesn’t?  We sit in the stands, we sit on the couch, we think we have all the answers.

How hard can it be? Anyone who knows baseball could do it, right?  Maybe? It certainly would be fun to find out.

Well, a small-business owner in the leafy hamlet of Oneonta, New York got the opportunity and jumped at it. Four years ago, the Oneonta Outlaws went up for sale, and Gary Laing, a life-long resident of the City of the Hills, didn’t miss his chance. After a brief conversation with his wife, Karen, he plunked down the purchase price (amount, undisclosed) and along with a silent partner – a dear friend who Gary first met playing at Oneonta Little League – became the proud owner of an amateur baseball team.

But we are getting ahead of ourselves, as this story needs to have history in order to have context.

Oneonta, New York has been the home to some form of organized baseball going back nearly 100 years. The Utica Utes (of the NY-Penn League) first came in 1924, changed their name to the Indians, and folded after one season. The team came back in 1940, and won championships in 1941 and 1942. The League was shuttered for three years due to that pesky World War; but when play resumed, the renamed Oneonta Red Sox won championships in 1948 and 1951 (take that, Harry Frazee). And then the League folded (okay, maybe curses are real).

In 1966, the Red Sox came back to Oneonta for a single season. In 1967, Sam Nader bought the team and renamed them the Oneonta Yankees. And that, my friends, is where the legend truly begins.

The O-Yanks would be an institution in town for three decades, winning 11 titles (apples and trees?). Don Mattingly, Bernie Williams, Andy Pettite, and Jorge Posada took their hacks at Damaschke Field; and future Hall of Famer John Elway roamed the outfield in Oneonta before scrambling on the gridiron in Denver. 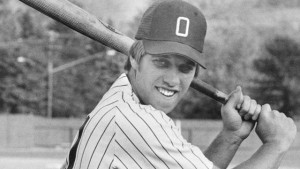 The Boss was known to set up shop in a box down the first base line, carefully observing his future Bronx Bombers. Hell, back in 1920, the Sultan of Swat – playing with the Babe Ruth All-Stars – smacked a homerun over the right field fence at Neahwa Park (now known as Damaschke Field, the home of the Outlaws).  [Ed. Note: In the 5th inning of that game, the Babe broke a bone in his wrist sliding into first base.]

Man, if those baselines could talk . . .

But all good things must come to an end, and in 1999, the O-Yanks moved to Staten Island. The Tigers quickly moved to town. The O-Tigers played in Oneonta until 2009, and then left for Connecticut. Alas, Oneonta was not without baseball for long.

In 2010, Keith Rogers and Dan Scaring brought the Saratoga Phillies to Oneonta, renamed them the Outlaws, and set sail. After installing local legend Joe Hughes as the manager, the team won a championship in 2011.

Prior to the 2013 season, Gary Laing heard a rumor, made a few calls, and soon thereafter, a life-long dream came true. Growing up poor in Oneonta in the ‘60s, often without enough food to eat, Gary would shag foul balls for Sam Nader’s O-Yanks at Damaschke, bringing them back in return for free hot dogs. Never did Gary think that one day he would be the one giving out hot dogs to little kids who shagged balls at that same park, hit by players on his team.

Gary was born and raised in town, graduated from Oneonta High School (one year ahead of Joe Hughes), and never left. He started a local business 1991, built it into something very successful, and then decided to buy a baseball team.

Granted, it’s not a Major League team, and his day-to-day decisions are vastly different than those required by Hal Steinbrenner or Peter Angelos; but he deals with real baseball issues every day, real baseball economics, and real baseball fans.

A few weeks ago, I was fortunate enough to spend some time with Gary and Karen. The term “Salt of the Earth” was invented for these two. They, along with their young sons Chris and Josh, run the team – from concessions to ad sales to being a host family for the team’s manager.

The Outlaws are members of the Perfect Game Collegiate Baseball League, where college players from around the country come for a summer of fun, fans, and a whole lot of baseball. The PGCBL is made up of 13 teams in Upstate New York – from Jamestown to Glen Falls, from the Adirondacks to Saugerties.  (If you have never spent the summer in Upstate New York, get thee to the airport – it is spectacular.)

To get around the state, players are ferried in chartered buses. To save money on accommodations, teams typically do not stay overnight in any city/town/village/hamlet. Rather, when the game ends, players take a shower, get a small meal (provided by the home team directly from the concession stand), and back on the bus they go.

“Host” families take in a player or two for the summer in return for a small stipend and season tickets to the team’s roughly 25 home dates. And yet, there is never a shortage of families willing to open up their home, set an extra seat at their table, and add another stop to their carpool. The term “host” is often quickly dropped from the description, and each spring families travel around the country to see “their boys” play college ball.

But while the players and their families are having an experience they will never forget, the owner is trying to figure out how to pay the bills. Sure, when compared to the Cubs, a PGCBL team has considerably fewer expenses (both in quantity and in cost), but also considerably fewer revenue sources.

Want to own a team? Let’s take a look:

In short, it takes a field of green to field a team.

So how does an owner balance the books? How are revenues generated?

Most teams run either right at break even, or at a slight deficit. This is not a money-making proposition – this is a labor of love.

So there it is. There are 41 summer collegiate baseball leagues all across this great country, accounting for approximately 376 teams (it changes season-by-season).

Find one for sale. Buy it. And soon you, too, will be putting your baseball knowledge, your business acumen, and your marriage to the test. Gary Laing will tell you that there is nothing he would rather do and no place he would rather do it. Ownership has its privileges, including incredible heartbreak and immense joy.

One last thing: If you find such a team and are looking for a partner, give me a call.