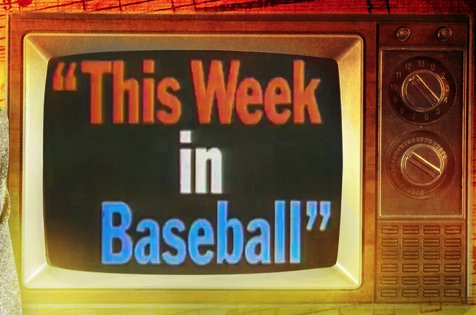 I’m lying in bed Saturday morning, minding my own business. I’m scrolling through Twitter, as I am wont to do. And then I come across this beauty:

In the sixty-two seconds it took to watch that video, I was magically transported back to 1985. I’m sitting on the couch, enjoying the waning seconds of This Week in Baseball, sad that it will be a whole ‘nother week until Mel Allen regales us with tales from across the league; but equally excited that the Game of the Week is about to start.

I don’t want to be the “in my day” guy. And I certainly wouldn’t say “it was better when.” But there was something thrilling about that 31-minute sequence, This Week in Baseball followed by the first moments when you would learn which of the two Games of the Week would be airing in your area. If you checked the TV Guide, it would give you two potential games, and you never knew which was yours. The “A” game was called by Vin Scully and Joe Garagiola; the “B” game by Bob Costas and Tony Kubek. Either was a treat. Living in Los Angeles, we took Vinny for granted, so Bob and Tony was a nice change of pace.  No matter which, we were in for two and half hours of sheer bliss (Note: The average time/nine innings in 1985 was 2:39 (3:00 in 2018).)

Our kids have no idea. They have the At Bat app and the MLB Network. They have national broadcasts and games available every night. They can see and follow any player and any team their heart desires. But in our day, unless you had basic cable and were a fan of Dale Murphy or Ryne Sandberg, you didn’t get a whole of lot of mid-week baseball. And pity the American League fan. There were no interleague games. If you wanted to see your favorite Tiger or Indian or Twin, you had to wait until the All-Star game in July. Think about that – there was 50% of MLB that you could only see (a) if you lived in an American League town or (b) when a specific player appeared in the mid-summer’s classic. It is a concept I can barely get my head around – there is no way my kid could.

To make matters worse, in 1985 we didn’t have night baseball in Chicago. So, even if we were lucky enough to have this classic

on top of our television, you had to stay home from school in order to watch the Cubs’ home games. Living on the West Coast meant that, at best, we could catch new Hall of Famer Lee Smith on the hill in the eighth or ninth inning after the bus dropped us off. But, more often than not, we were relegated to Pete Van Wieren (RIP) and Skip Caray (RIP) and the WTBS Superstation (RIP) (now known simply as “TBS”) broadcast of the Braves game from Fulton County Stadium or Olympic Stadium or Three Rivers or The Vet.

But Saturdays were different. Saturdays lent us a world of possibility. Saturdays gave us a chance to see the Royals in their powder blue unis, or the Rangers in theirs. It gave us a chance to see Bell, Barfield, and Moseby roaming the vast expanse of Exhibition Stadium. For me, the moment the mailman delivered the TV Guide on Thursday, I checked to see if I would get another glimpse of Fenway Park. Would my beloved Red Sox at least get the Costas and Kubek treatment? My fingers absorbed a whole lot of ink flipping those small pages searching for who, and when, and where.

Like most kids, I played baseball on Saturdays, and thus was forced to missed many a TWIB and many a GOTW. That is why, even to this day, I still have certain VHS tapes in my attic (not that I have a machine on which to play them). A post-Pony League Carl’s Jr. Happy Star, crinkle-cut fries, and then a spot on the couch with the remote in hand. My spine still gets a tingle as I type these words.

Then, the moment of truth when you walked in the door – never certain that the new-fangled VCR did what it was supposed to do. And you were never sure if someone had pulled out that little tab on the cassette that rendered the tape useless. Tell me something more devastating than coming home and finding that your program didn’t record? The viscerality (yes, I made that word up) of those memories courses through my veins to this day.

I don’t imagine I am alone in this. If I am, please don’t tell me. I am comforted by the idea that there were hundreds, maybe thousands, of other thirteen year old kids who had the same Saturday morning/afternoon routine as me. And when I hear those dulcet chords, when I watch Doc Gooden pitch and Gary Pettis crashing into the wall and Tony Peña in his crouch, when I see Mike Boddicker’s curveball and Steve Garvey in the Padres brown and gold raise his right arm as the music crescendos, I am taken back to an easier and simpler time. I am not saying it was a better time, but I’m not not saying that either.