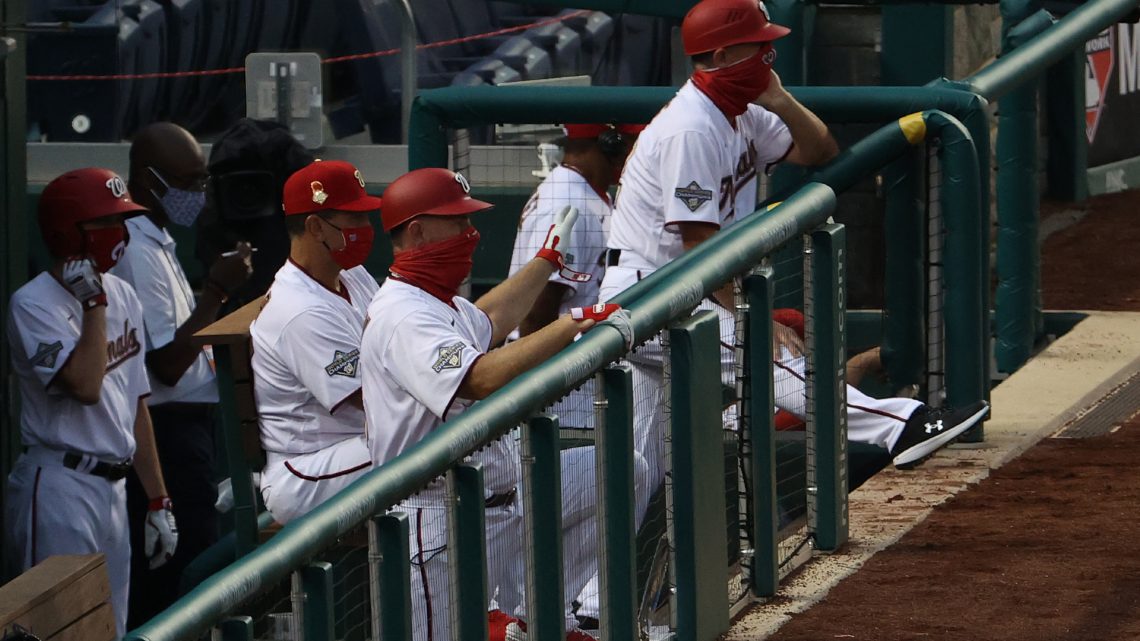 About three years ago I wrote an article entitled “The $25,000 Fine,” which dealt with the scourge of batters not running to first on an uncaught third strike. Surprisingly, much of the feedback I received from that missive was negative, as people didn’t seem to care too much about players’ laziness; people did not seem to think that players should be pecuniarily punished for their failures on the field; people didn’t seem to think that publicly shaming athletes for their indolence was good policy. Okay, fine, whatever. It was an idea, a lark; it was meant at least 50% tongue-in-cheek.

But my latest concept has much more serious implications – many of which are playing out in real time. In an effort to play the season safely (if that is even possible), MLB and the MLBPA developed what is called the 2020 Operations Manual, a 101-page document detailing the league’s health and safety protocols. The sheer volume of this document is staggering, and covers nearly every eventuality you could imagine – except, of course, what to do if four players on one team test positive before a Sunday afternoon game. But I digress.

There is no need to delve too deeply into the inch-thick document, but suffice it to say that it was well thought out and intended to keep the players as safe as possible. For our purposes, however, it is important to highlight just a few of the provisions:

• The only contact allowed on the field are tag plays and other incidental contact that occur during normal play.

• Players, coaches, and trainers are required to wear face coverings everywhere except the field.

• Dugout seating requires at least six feet between each player.

• Players and staff are required to put a personal towel over the dugout railing when leaning over the same.

• A ball will be thrown away after it is touched by multiple players, and throwing the ball around the infield is discouraged.

• First- and third-base coaches are not to approach baserunners or umpires, and players should not socialize with opponents.

I have pointed out these specific rules because after having watched baseball for six days, it seems that all of them are being broken…with impunity. And, in Houston last night, the Dodgers and Astros came dangerously close to breaching the “fighting will be met with severe discipline” edict (I guess severe discipline can be assessed for not fighting as well, as Joe Kelly, Dave Roberts, and Dusty Baker learned this afternoon).

But if what happened with the Miami Marlins this week is not enough to scare players straight, I have an additional incentive. The players were informed of the litany of rules in late June, before they embarked upon Summer Camp. They have lived with the protocols for more than four weeks. If they don’t know or understand them by now, and if they don’t appreciate the gravity of adhering to them by now, they never will. So let’s put some money where their mask is supposed to be. Each player is given a mulligan for everything that has transpired to date – and that includes the Marlins players who (allegedly) went out on the town in Atlanta and were the architects of their own demise – and they are, as of today, given one additional warning for infractions. It is useful to note that while the league cannot track everything personnel does (especially away from the ballpark), a violation of any of the rules listed above can be seen on television every night. One need not contact trace to find an infringer; one just needs to log in to MLB.TV. After the warning, each player is fined $5,000 for each violation, and the team is punished in an equal amount. If Don Mattingly keeps his mask under his nose while in the dugout, $5,000 for him + $5,000 for the Marlins. If the Athletics jump on Matt Olson after a walk-off homerun (all but two without masks, natch), $5,000/each + $55,000 for the team (Olson does not get fined). All proceeds go to Black Lives Matters or other charities dealing with social justice issues. 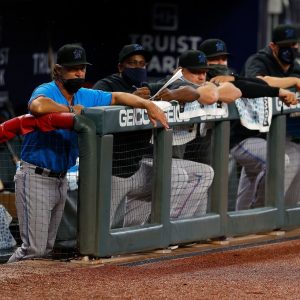 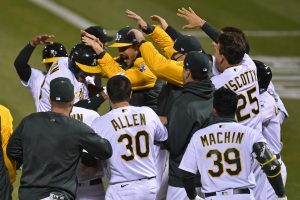 Unlike the $25,000 fine I previously wrote about, there would be no announcement or public shaming aspect. Just cold hard cash. Players walk into the clubhouse the next day to find a bill from the league. Despite Charles Barkley’s protestations to the contrary, athletes are role models. And although it seems that more and more people are getting behind the idea of masks being incredibly helpful in curbing the spread of this disease (including, ever-so-gingerly, the Commander-in-Chief), and that social distancing is vital to keeping the disease at bay, you can turn on your television every night and see well-known athletes not abiding by these nearly-universally accepted concepts and not obeying their specific rules. What does that say to the general public?

And even if this is not about setting an example for society at large, what about the non-athletes these players encounter every day? It was reported today that a visiting clubhouse staffer in Philadelphia tested positive after the Marlins were in town. That guy doesn’t make millions of dollars per year; my guess is he doesn’t make six figures. And yet the players, so cavalier in their approach to the protocols, have put his life in danger. If the risk to the season isn’t enough; if care for your fellow man isn’t enough; if being a role model for kids and adults isn’t enough; then maybe taking a hit to their wallet will be. And you can be sure that if the owners, who fought and scratched to make the best financial deal possible for this abbreviated season, are forced to scratch a check every night for their team’s failures, they will be demanding that their manager starts running a tighter ship. There simply may not be any other way.

Here’s to hoping that everyone stays (and/or gets) healthy and that we continue to hear this every day from now through October: