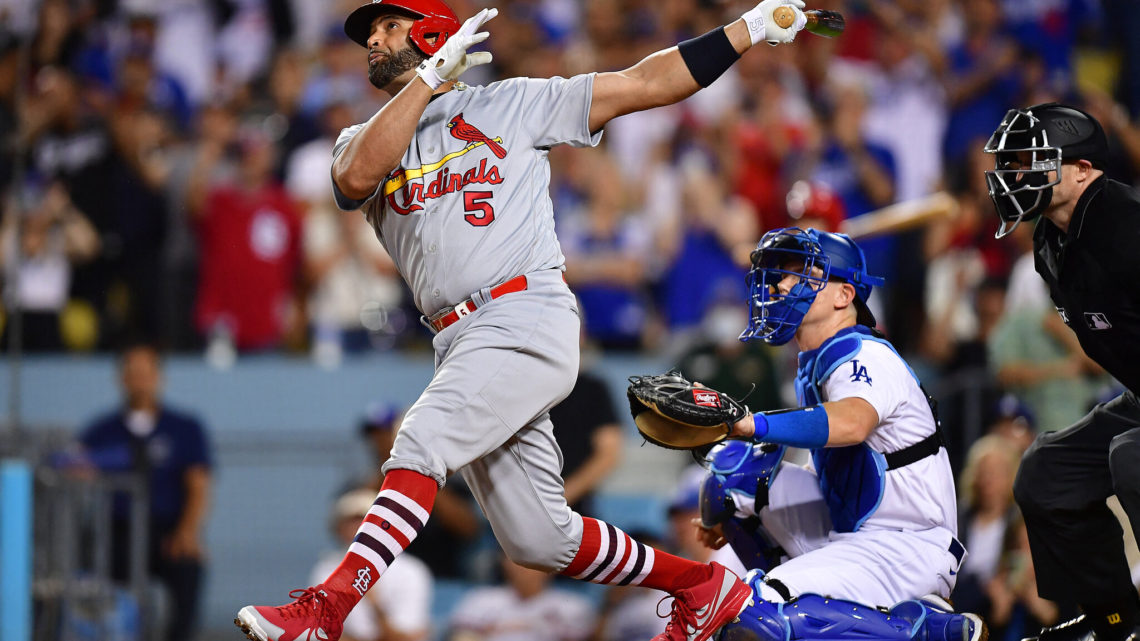 On a Saturday afternoon in 2002, I walked into Pacific Bell Park to watch a pre-game montage of Barry Bonds’ milestone home runs, culminating with #600, which Bonds reached the night before. I was 18 hours too late to witness history. And when Bonds proceeded to go 0-1 with three walks, I didn’t even get a chance to see #601.

When I ventured into Dodger Stadium a three Friday nights ago, I had a hope – but not a ton of confidence – that this time I would be luckier. Truth be told, I didn’t really believe Albert Pujols had a chance to hit two home runs on a cool(ish) night at Chavez Ravine. I figured he might get one, at which point we would have seen history, but all of us in attendance would have been left on the cusp of immortality.

In my years going to ballgames across the country, I have been lucky enough to see some pretty cool things – many of which I didn’t expect. Dennis Martinez throwing a perfect game on scalding Sunday afternoon; Big Papi hitting a walk-off dinger at Fenway; the wind playing tricks at Candlestick; a Justin Turner walk-off in the NLCS; my son catching a foul ball at Comerica Park; the longest World Series game ever played; and a wild 13-12 ten-inning World Series Game 5 in Houston. Not to mention seeing my beloved Red Sox clinching the World Series with Manny Machado bending the knee.

Many of these moments were jaw-dropping and scream-inducing. Many had me leaving the park with a perma-grin that could not be wiped off for hours if not days. But what I witnessed a few Friday nights ago was something else. It was surprising, but not totally unexpected. From 2001 to 2010, there may not have been a better, more consistent hitter on the planet than Albert Pujols. And even when that run ended, he posted six additional seasons with an OPS+ between 113 and 148.

But when the mighty fall, they fall hard. Since 2017, Pujols has been a shell of himself, and that of an average ballplayer. When the Angels released Albert in May of 2021, many thought that was the end of the line – a Hall of Fame career ending with a whimper. But the Dodgers – as they so often do – breathed new life into someone else’s castoff, and got the most out of Pujols’ aging bat. In 189 at bats over 85 games for the Dodgers, Pujols socked 11 home runs and posted a 99 OPS+. But, more importantly, in his new role as “Tio Albert,” he re-found his love of the game.

Going into 2022, signing back with the Cardinals, we all wondered if Albert Pujols could – like Billy Chapel, his fictional counterpart – “push the sun back up in the sky and give us more day of summer.” For the first half of the season, he couldn’t. Through July 2nd, Pujols was hitting .192 with four dingers and a .325 slug. At that point, forget Alex Rodriguez, forget 700, all we were hoping for was an ending slightly better than Willie Mays following down in the Shea Stadium outfield. But then something happened – maybe it was Independence Day BBQ in St. Louis, or maybe Albert just began guzzling from a fountain of youth at the Gateway Geyser. Either way, as Ben Linbergh wrote about, from July 4th to the end of the season, Albert hit .321, and pounded 20 home runs with a .695 slug. To bastardize Vin Scully twice in the same paragraph, when the Cardinals arrived in Los Angeles on September 23rd, what once seemed impossible, became improbable, became possible, and then simply became.

Prior to the game, Albert and Yadier Molina were honored and gifted with custom Dodger golf bags. Albert addressed the Dodgers, thanking them for giving him a new lease on life last season (after the game he was quoted as saying: “If they didn’t give me that opportunity [last season] I don’t think I would be sitting here today or you [would] have seen history tonight”), and thanking the Dodger fans for embracing him after his ignominious departure from the team to the south.

When Albert batted in the first inning, everyone stood, and nearly everyone held a camera hoping to document history. Alas, it was not to be.

Albert didn’t disappoint when he came to the plate in the top of the third, crushing a 1-2 fastball more than 400 feet into the left field bleachers. The place exploded. The Dodgers had already clinched the NL West, so the fans didn’t care about the score. And when Pujols pointed to the sky upon touching home plate, we all collectively did the math: it’s the third inning, he potentially has three more at bats. Could he? Would he? Was that too much to ask?

In nearly 50 years, only 42,256 fans have seen a 700th home run in person. That was the attendance in San Francisco 18 years ago when Bonds joined the Hammer and the Babe. Now an additional 50,041 sat on the edge of their seats hoping to join a pretty exclusive club of fans.

Albert didn’t keep us waiting long. In the top of the fourth, after the Dodgers swapped lefty Andrew Heaney for righty Phil Bickford, Albert blasted a cement-mixer slider high and deep into the Los Angeles night. This one did not travel nearly as far as the first, but there was something romantic about the towering nature of the drive. #699 was hit so hard and so fast, we didn’t have time to appreciate it – we just hollered and watched Pujols circle the bases. But #700 was wholly different. It was majestic; it gracefully hung in the air, allowing us to track its flight, to give us hope, to build our anticipation, and ultimately to exult in its final resting place in the glove of an ecstatic fan in the first row of the left field pavilion. If a professional athlete and his fans can ever truly share a moment, the arc of this particular home run allowed for it to happen.

I cannot say that the Dodger Stadium crowd reached the same volume level as it did in after JT’s shot in the 2017 NLCS, or Max Muncy’s in the 2018 World Series, but it was damn close. If you love the roar of the crowd, the shower of cheers (to paraphrase Vinny, once again), then you could not help but be delighted by “what we just saw” (h/t Jack Buck).

Upon crossing home plate, Pujols sprinted to the backstop to give a high ten to Adrian Beltre, a fellow Dominican and dear friend, who made sure he had a literal front row seat for history. And then he offered a bunch of high fives before fully embracing Yadi – his teammate for nine seasons, both of whom are enjoying a pretty righteous send-off.

Tim Kurkjian, the Hall of Fame baseball writer, likes to say that what he loves about baseball is that you never know what you are going to see when you go to the ballpark. Those of us fortunate enough to be at Dodger Stadium on September 23, 2022 got the chance to witness history; it was not something we ever thought we would see, and something we as baseball fans may never see again.