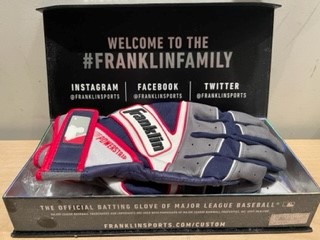 For years I thought I was alone. No one else, I could imagine, spent as much time as I did analyzing players’ uniforms and gear. From double-flap helmets giving way to single flaps only once they reach the majors, to Starter jackets for pitchers on the base paths, to the mock turtleneck undershirts that were all the rage in the late ‘80s and early ‘90s. I would tune-in to games, read magazines, and watch the highlights, all in an effort to take in the small details that mattered to no one…except me.

But in the past decade or so, that all changed. Like manna from heaven, websites were created and information began to flow. I learned that I was not alone. I realized that there are other weird, fanatical people like me. People who know – and want to know – if Player X was wearing a different color belt or wristbands with his picture on them; people who know – or want to know – if Player Y was using a different model glove or wearing a magnetic necklace.

The granddaddy of sports uniform minutiae is Uni Watch (www.uni-watch.com), founded in 1999 as a column in The Village Voice. Over the years the site grew in size and stature. And if ever a topic was made for the interactive experience of the web, Uni-Watch was it. Paul Lukas – the founder and writer – is a uniform expert, and writes about the most minute detail of everything from European soccer to college football, and anything and any sport in between. When I first encountered Uni-Watch and started reading Paul’s blog, I focused mostly on the baseball research, but I was just happy to know that there were hundreds of thousands (millions?) of people like me enamored with this ephemera.

For players’ equipment, there is no better authority than What Pros Wear (www.whatproswear.com). Mike Carozza started the site in 2012 because he wanted to wear Ken Griffey Jr.’s glove and couldn’t find a good source of information on “what pros wear.” So he decided to become that source; he wanted people like him to know who was wearing what, and where they could buy it. The site was made for me – or people like me…and Mike. And when I discovered it, I could not believe that such a thing existed. It was like Mike had been reading my mind and watching me scan SI’s pre-season preview for new looks, or like he saw me freeze-framing the television so I could determine if Salvador Perez was actually wearing his tried and true All-Star gear but just with the Rawlings label stitched on. You were wondering the same thing, right?

While I have been fixated on all equipment and uniform traits for years – I am a sucker for actual stirrups – my first, true, and everlasting love is batting gloves. I have been a batting glove-aholic for as long as I can remember. I could never – ahem, can never – walk into a sporting goods store without making a beeline to the baseball section. I find the aisle with the batting gloves and check out what they have on offer; and often find myself trying on the latest models (remember when stores had sample gloves on an extendable cord for just this purpose). This adoration goes back to my youth.

When I first started playing baseball, I always got a new pair before the season. At that time, Saranac was the lead manufacturer, first with their wristband-loop Velcro closure (think Dusty Baker), and then with their “Triangle” logo Velcro closure. I cherished that soft leather, and how they felt right out of the package. The batting gloves of the ‘70s and early ‘80s, which – fun fact – were the progeny of golf gloves, weren’t the most comfortable and took some time to break in. Then, around 1985, I discovered the world of Franklin. And my whole world changed.

When you opened a new pair of Franklins, the first thing I did (do) is take a whiff. Nothing compares to the musk of the Pittards leather that Franklin still uses to make their gloves. And that concept of taking time to break in? That went away the first time I donned a pair of gloves with Franklin’s unique tri-curve design. As Mike Schmidt, the first MLB endorser of Franklin would attest, Franklins were part of your hand from the get.

It is truly hard to explain my deep fascination with this company and their inimitable product (more on that below), so I won’t really try. Suffice to say that I have made note of every design change Franklin has produced over the past 35 years; I have clocked every additional colorway added to their arsenal; I have observed which players are added to their roster nearly every season (can we attribute Aaron Judge’s early-season success to his new partnership with Franklin?), and those, like my beloved Will Clark, who left the Franklin family for Easton and then to Nike (or Ken Griffey, Jr., who skipped the stop at Easton and went directly from Franklin to Nike; or Ronald Acuña, Jr., who had some of the best batting glove game in the game, but switched from Franklin to Nike this season; I could do this all day).

When I was in high school, and Franklin’s commercial colorways were not widely available (the local sporting goods store carried all black, all white, royal/white, red/white), I would use a Sharpie and a highlighter to create my own. But in 1988, long before the internet and PayPal and Zelle, I took it upon myself to call the 800-directory (extra points and a prostate exam if you remember using that) to get the phone number of Franklin Sports in Stoughton, Massachusetts. Armed with a number, I cold-called the company and asked if I could order batting gloves directly. Either out of pity, or with a prescient eye towards eventual direct-to-consumer sales, they faxed (!) me an order form. I stewed on the various options for days – a whole world had now opened to me, and seemingly, me alone. I offered this once-in-a-lifetime opportunity to my teammates, but they could not be bothered. I begged my mom to front the money, as she needed to write a check that I mailed back east. A few weeks later a package appeared in our mailbox – a few pairs of never-seen-before-in-person batting gloves. Forget Christmas or Hanukkah, this was a brand new holiday!

As luck would have it, I was in Boston with my family last month when Franklin was having a warehouse sale. Their headquarters was about fifteen minutes from where were staying, so we HAD to go. We pulled off the highway, and there it was – just a series of buildings, but awe-inspiring nonetheless. We parked and headed in. Take one guess where I went first? They had hundreds of pairs of batting gloves that just needed to be seen, touched, tried on. No one in the immediate family plays baseball anymore, but my nephew does. So for him, we shopped. We also grabbed a volleyball, some hockey pucks, and a t-shirt. And that was when the connection was made.

An innocuous question about having any more shirts in my size led to a conversation about the above-referenced faxed order more than three decades ago. And that conversation introduced me to the literal Franklin family – Larry (the founder’s son) and his son Adam. Once Adam discovered my fascination and historical knowledge, he brought me to the Taj Mahal, the Sistine Chapel, the Mecca of batting gloves. My family and I were given entrée into a room at the back of the Franklin facility where all MLB players’ batting gloves are housed. In this room, from floor to ceiling, were cubbies with thousands of pairs of gloves. As a show of my insanity, I started rattling off players just by the model, design, and colorway. After nearly forty years of obsessing about batting gloves, I was welcomed into the inner-sanctum.

Adam showed us where the latest designs and improvements are made. He showed us concepts and products that even the big leaguers don’t yet know about (I can tell you what colors certain teams’ not-yet-released City Connect uniforms will be because I have seen their accessorized batting gloves), and he gave us a behind-the-scenes look at the goody box of gloves each Franklin-wearing player gets for each season’s special occasion games. As I said to my kids, this was Dad’s Disneyland.

Kids today don’t just get to mimic their favorite player’s batting stance or pitching motion. Now they can wear all of their gear and use all of their equipment. The information is there for everyone to find, fixate on, and potentially buy. Swing by your local Little League and you will see kids with Evoshield elbow protectors; stop by your local high school and see players diving back into first with running mitts. As for me, well I spend my free time playing with the Franklin batting glove customization tool (www.https://franklinsports.com/custom).

When I was a kid, I would have sooner believed that you could hang a television on the wall and watch first-run movies in your living room, or that you could store all of your albums and cassettes on a device the size of a deck of cards, or that you could do your research project on a Commodore 64, than I would have believed that you would always know exactly what every baseball player was wearing and what gear he was using, or that you could create your own custom batting gloves and have them shipped directly to your home just a few weeks later. People always talk about the good ol’ days. Forget that. With Uni-Watch, What Pros Wear, Franklin Sports, and, hell, your local Dick’s Sporting Goods, we are way better off today. Head on over, and…