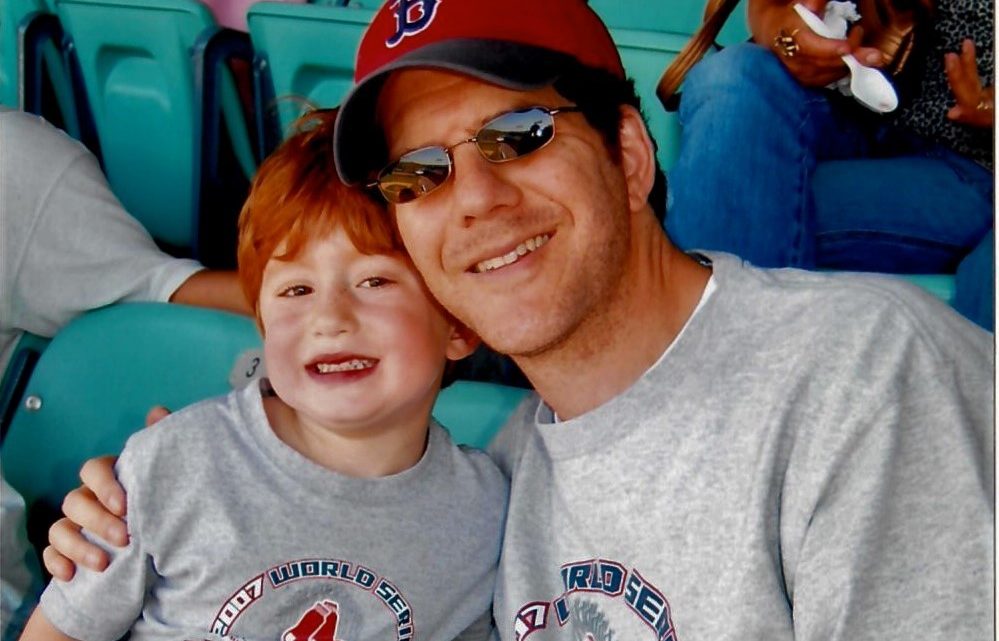 My son was three years old when I handed him a small glove and said, “Let’s go.” We were headed to Dodger Stadium and his first baseball game. But his early life experiences would not be limited to Chavez Ravine. No, as my father did before me, and as his father did before him, I elected to foist my ardor for baseball onto my son, to teach him the game and to teach him to love the game.

By the time he was six years old, he had already visited a handful of stadiums and walked on the field at Fenway Park. By age ten, he had seen a Home Run Derby and an All-Star Game, and met legends like Goose Gossage. Hell, before he could drive, he had visited the Baseball Hall of Fame and attended two World Series games. Sure, my dad and I were each raised on baseball, but neither of us had it nearly as good as my son, who was (and is) living the life of Riley when it comes to the game.

My son took to baseball like a fish to water, and began playing tee ball like the other kids. And soon he was working the Little League scoreboard on Saturday afternoons. Which led to him asking me to teach him how to keep score. He would walk around with an umpire’s indicator in his hand to keep track of the action. He learned the history of the game, watched present-day highlights, and kept an eye out for future stars (including one he played with). A running joke between us — but only because it is partially true — is that the only non-required reading he has done in the last five years is Dustin Pedroia’s biography.

My son has an affinity for baseball, and for baseballs. He has a knack for knowing just what level of annoyance is necessary to get a player to toss him one, and he knows where to stand at the end of an inning. Not even blue is safe, as my son positions himself by the umpire’s tunnel at the end of a game knowing that perfectly good pearls are in the home-plate umpire’s ball bag just waiting to be liberated and added to his collection.

But more than anything, my son loves the ballpark. Once he got his driver’s license, he would leave for games hours before me, parking outside the stadium and trekking in to be the first through the gates. And he never wants to leave before the game is over. And by “over,” I mean that we need to step over brooms sweeping the stands.

Earlier this summer, our family spent some time in Chicago. So, of course, my son found his way to Wrigley Field hours before first pitch, leaving the rest of us to meet him there at a more reasonable time. And since we were going to be in the Midwest, and to continue my personal quest to get to every park in the majors, I booked us a trip through Ohio.

First stop: Great American Ball Park in Cincinnati. This time I went early with my son, but as soon as we had cleared the metal detector, he was off to chase a batting practice ball or a ballplayer interaction. Cincinnati was a revelation — a great park with an even better vibe. After walking past the statues of Reds greats on Joe Nuxhall Way, we were ready for our next stop: Huntington Park in Columbus.

Truth be told, this Triple-A sojourn was my son’s idea. He looked at the map and the calendar, and realized that Columbus was on our way, and the team was in town. So, to the Clippers game we went. There we were treated to a grand tour of the minor league (in affiliation only) park for a team with a rich history. We sat along the first-base line and were close enough to hear the coach yell “Back!” when a pick-off attempt was made. Circling around the outfield, we could hear the center fielder call off his compadre on a fly ball in the gap. The food was great, the lines were short, and the parking was cheap. And the team store had a better selection than a major league team that I will not name to avoid offending any readers.

After a night in Columbus, we headed north to my son’s namesake yard: “The Jake.” Now known as Progressive Field, it lived up to the hype. Sure, I would have loved to have been at Municipal Stadium when the Red Sox won Game 5 of the 2007 ALCS, with Josh Beckett besting CC Sabathia. But from what I have heard about the “Mistake by the Lake,” I didn’t miss much from a ballpark standpoint. The Jake, er, Progressive Field, is fantastic. The sightlines are clean, the concourses are broad, the sausages are flavorful, and the beer is plentiful. The park holds 35,000, and it feels both larger and more intimate.

At one point late in the game, a collection of Indians faithful decided to taunt Miguel Cabrera. Even with a packed crowd, Miggy could hear them loud and clear. Their exchange was hilarious, and when the future Hall of Famer motioned for the group to stop drinking, the place erupted with laughter. The Indians scored 13 runs, Cabrera hit his 493rd career dinger, and the fans went home happy. This was one of those nights that you don’t want to end.

We took a long walk out of the ballpark — well after the grounds crew had descended onto the field. And then an even longer walk back to our hotel. Our journey was coming to an end. In that half mile stroll, I began to feel a great deal of nostalgia. Not only was this trip over, but so too was this phase of my relationship with my son.

Soon he will be a heady college student, with all that that entails. Soon he will be living nearly 2,000 miles and two time zones away. Soon he will be one of those rowdy guys drinking too many Great Lakes Lagers and shouting at opposing players. And, before too long, he will be taking his son (one can hope!) to ballgames and ballparks across this great land. East 9th Street in Cleveland, Ohio felt a little like a Rubicon, from which there was no going back.

But, like baseball, hope springs eternal. Once we were back in L.A., we had one more bite at the apple. With the Red Sox in town, we headed down to Anaheim Stadium to catch a glimpse of Shohei Ohtani (and to get his giveaway birthday pillow). Jake had a conversation with, and got a ball from, Jason Varitek, because, why wouldn’t he? And he caught a ball between innings. And the Red Sox won a nail biter. And we headed home. We drove a long way in silence. Him, with thoughts of baseball and the future. And me, with thoughts of baseball and the past.