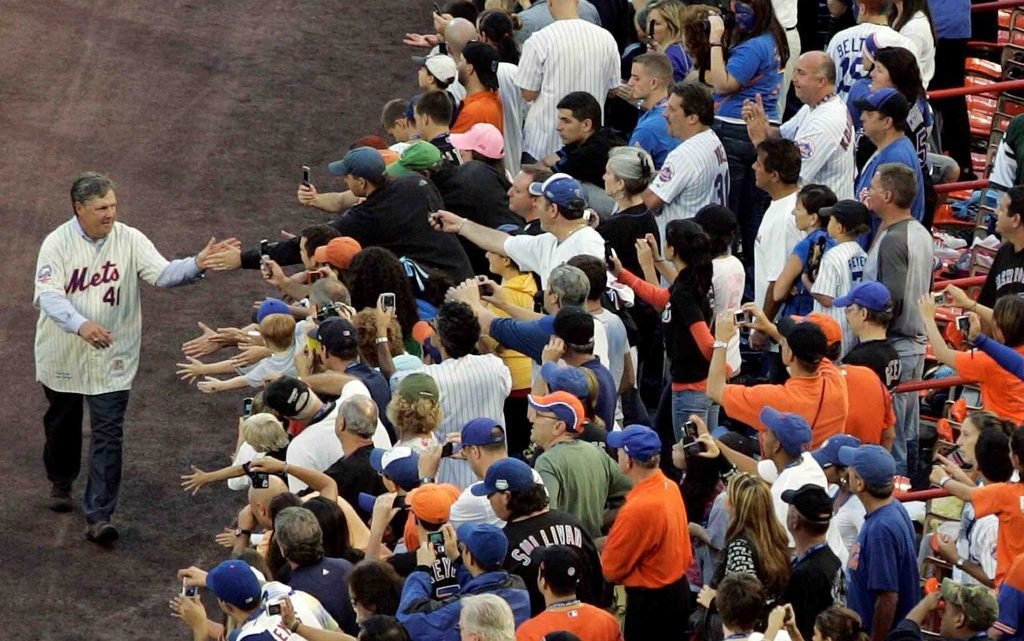 When I was about six years old, as a favor to my father’s cousin, Doug DeCinces brought me (and my dad) onto the field at the “Big-A” before a game. He introduced us to Jimmy Reese and Rod Carew, and let us step into the dugout. When it was over, I am pretty sure I floated back to my seat in the grandstand. More than four decades on, I still remember that day.

When Tom Seaver died this past week, the result of Lewy body dementia and Covid-19, the collective baseball community opened its nostalgia vein and bled all things “Tom Terrific.” So many great stories were written about Seaver not making the varsity team until his senior year of high school; his brief enrollment in the Marines before a late growth spurt; his time at USC and his then-voided draft by the Braves in 1966; and, of course, the serendipity of the Mets winning a mini-lottery and landing “The Franchise.” There was no shortage of tales about Seaver’s brilliance on the mound, and the lives he touched off of it.

In the midst of the Seaver hagiography, a buddy sent me an essay written by Josh Wilker of Cardboard Gods. It tells the story of an 18-year old Josh hitchhiking his way to Fenway Park in 1986 to watch Seaver pitch for the Red Sox. I won’t step on the article – it is well worth your read – but suffice it to say that watching a future Hall of Famer on the mound that day had a lasting impact on Josh’s life.

Reading Wilker’s story got me thinking about the relationship between athletes and us mere mortals, and the asymmetricality [Ed. Note: I know it is not a word.] of that bond. Performers perform, they do their job, and unbeknownst to them, our lives are oftentimes changed.

Athletes put on their uniform, take the field, and earn their pay. They have no idea the effect that that performance, on that one day, in that one game, has on the people in the stands. And I am not talking about Reggie Jackson or Kirk Gibson, Don Larsen or either “Game Six.” I am not talking about the games wherein the announcer states “35,000 in attendance but millions will claim to have been here.” I am talking about quotidian instances when a first baseman tosses a ball to a boy in the stands; or when a utility player gives his broken bat to a little girl; or when one man stepping on the mound fulfills a kid’s dream of witnessing that player pitch in person.

This phenomenon can happen in any sport, or any form of performance (see, Hamilton), but the imbalance seems that much more acute in baseball where they take the stage (in non-pandemic seasons) 162 times each year, so no particular game should have any more meaning than another…to the players. But to the fans, to the people who pay their hard-earned money, who surprise their children with tickets, or those who hitchhike from out of town, each game represents an opportunity to have a life impacted in ways one can never anticipate. And it doesn’t just have to happen on the field – it can just easily happen at a card signing or a chance encounter in the grocery store.

This concept begets a little chicken and egg dilemma. Do these encounters affect us because we hold athletes in such a high regard, or do we hold these athletes in such high regard because of the effect of our encounters? I, for one, am not philosophically adroit enough to answer that question. But I do know the impact is real. Any of us who have been fans for any period of time can think back to a specific moment and remember with perfect clarity what a player did or said that one time. These earworms are permanently embedded, but accessible enough to become stories told over and over, often to bored and weary friends and relatives.

But that begs a larger question – does this happen in our everyday life, outside the theater or the stadium? Is it possible that as we go about our lives, we are the players and the people with whom we interact are the fans? Maybe you gave up your seat on the subway to a pregnant woman, and she carries that act of chivalry with her forevermore. Maybe you allowed a driver to get ahead of you in traffic, and that allowed him to make the light and get to his kid’s game moments before he hit his first home run. That man will always hold the guy in the silver Civic in high regard. And the Civic driver – like Tom Seaver in Wilker’s story or Doug DeCinces in mine – is none the wiser. Maybe you passed along your friend’s kid’s resume to HR with a short note, and thus began a long and illustrious career. This concept could, conceivably, apply to everyone, everyday. It just may be that it is heightened when the do-gooder plays on a field in front of 40,000 fans.

People spoke of Seaver’s passing as if they lost a family member. And what a wonderful testament to a life lived – that a man who you didn’t know could impact your life in such a profound way that his death feels like losing one of your own. But Seaver didn’t know any of that. He went about his day, he did his job (better than maybe five or ten other people in the history of the game), and then behaved admirably off the diamond. He didn’t know whose life he affected, whose life he changed, whose earworm he created.

Bill Simmons is one of the most well-known sports journalists in the world, he calls any number of coaches and players good friends, he runs a media empire and can get anyone on the phone at nearly any time (including President Obama). And yet, even he has a Tom Seaver earworm. He reflects with great revelry the time he stood in a makeshift batter’s box while Seaver played catch with Bill’s buddy, Gus. Bill has traveled the world and seen every form of competition up close; he has hosted thousands of podcasts; he has written two books and millions of column words. And yet, nearly forty years after the fact, he can still describe, with precision, standing in his friend’s front yard when Tom Terrific buzzed him with a curveball. If you had asked Seaver about that day prior to his death, I feel fairly certain he would have had no recollection. But, no matter, Simmons does. And there are any number of stories just like that; when a performer did something or said something that impacted our lives – maybe not permanently, maybe not even significantly – but impacted us nonetheless.

These stories represent an important life lesson – our actions have reverberations well beyond our vision. The next time we pass a homeless man begging on the street or a kid selling chocolate bars or someone asks for a letter of recommendation, think about the impact that our response might have; consider those who may always remember a small word or deed, a simple act of kindness, something that we will forget in a day’s time, but they will keep with them forever. Tom Seaver did that for a generation of Mets fans; and so too have athletes, actors, and performers all across the world for their fans. We would be wise to follow their lead.