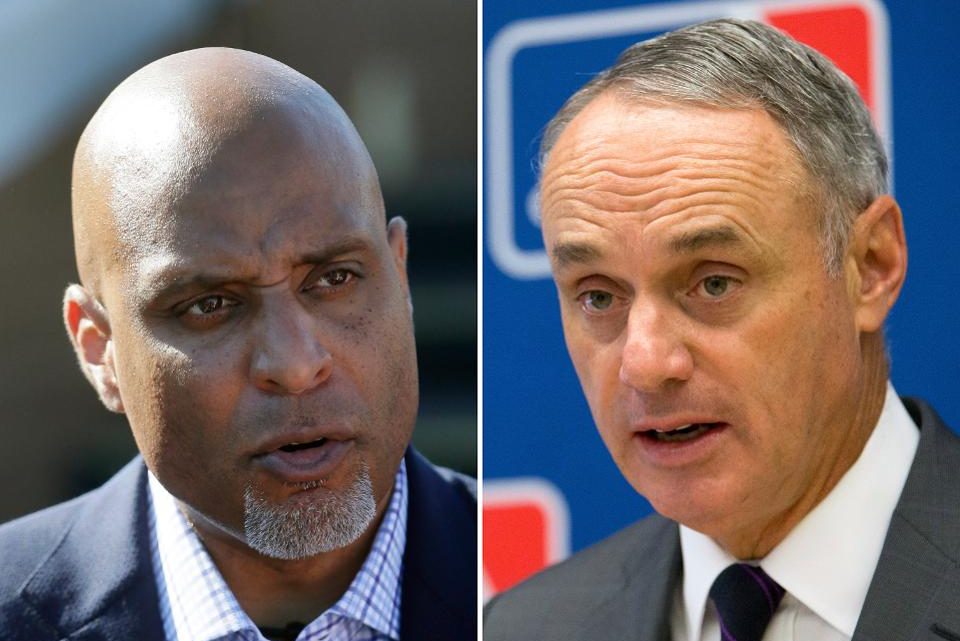 On Monday, MLB owners approved a proposal that Commissioner Rob Manfred presented to the MLBPA on Tuesday. There were a bunch of goodies in that proposal, including a potential 82-game schedule beginning in early July; expanding the playoffs to include 14, rather than 10, teams; universal use of a designated hitter in both leagues; playing only in your geographical area (e.g., AL East plays only against the AL East and the NL East); a 30-man roster, with up to 50 players being available. But the biggest item on the list is the one that may derail the whole enchilada: the owners want to put in place a one-season revenue sharing model, wherein the teams and the players would split all revenues on a 50/50 basis.

If you like math, or you want more specific details, I encourage you to read Jeff Passan’s article from Tuesday. Before this proposal even made it to the MLBPA, its president, Tony Clark, shot it down. Here is the quote that is getting a lot of press, and tells you the starting position of the players:

“A system that restricts player pay based on revenues is a salary cap, period. This is not the first salary-cap proposal our union has received. It probably won’t be the last. That the league is trying to take advantage of a global health crisis to get what they’ve failed to achieve in the past — and to anonymously negotiate through the media for the last several days — suggests they know exactly how this will be received. None of this is beneficial to the process of finding a way for us to safely get back on the field and resume the 2020 season — which continues to be our sole focus.”

This does not bode well.

It is necessary – or it certainly will become necessary – to parse Tony’s words to separate the fact from the hyperbole. While it is true that all other sports that have revenue sharing also have a salary cap, that is not necessarily the case here. If a vaccine for Covid-19 were discovered tomorrow, and the season were able to start in 30 days, then based on what the owners have offered, the players could potentially make more than they would under either the current 162-game construct, or the revised version wherein they get a prorated portion of their salary. Now, we all know that a vaccine is not coming that soon, so I have merely presented that as a strawman to thwart Clark’s rhetoric. In short, under this proposal, salaries would technically be capped by the total amount (actually 50% of the total amount) of revenues this season; but it is not, technically, a salary cap. This is because the salaries would be predicated on an unknown number (2020 revenues), and not prior year revenues (as utilized for the NBA and the NFL). But, let’s not get too deep into “Capanomics” here.

The union’s reasoning seems to be: we don’t get an uptick in salaries when the league, on the whole, does better in a given season, so we shouldn’t be penalized when the league, on the whole, does worse in a given season (which, without question, will be the case for 2020). This is a fair point, in a vacuum, but misguided in the current situation and under the current proposal. Again, this is a one-year fix in the face of a worldwide pandemic; not a reworking of the entire collective bargaining agreement. I know, I know, I can already hear the slippery slope arguments.

The better argument is that the player and owners already agreed to a new deal. You may have noticed the words “revised version” a few paragraphs above. Maybe you read right past them; but they are important. Although it may seem like several lifetimes ago, it was less than seven weeks ago that the two sides came to an agreement about salaries for the coming season. Or, at least they thought they did. That deal provided that the players would get $170M to be shared and allocated based on service time, and then those amounts would be applicable against any eventual salary for the season. The deal also provided that the players would get a prorated portion of their contracted salaries depending on the number of games played. So, in the 82-game version, players would get 50.6% of their 2020 contract amount. As far as the players are concerned, this issue was done and settled.

As an attorney, I live in fear that a contract I drafted or negotiated has some ambiguous language or some loophole that is only discovered after-the-fact. If this has ever happened to you, you can feel that pit in your stomach as you read these words. That must be what a bunch of high-priced lawyers in New York must be experiencing right now.

On Page 1 of the March 26th agreement between the players and the owners, the first point of the “Resumption of Play” section states: “[T]he 2020 championship season shall not be commenced unless and until each of the following conditions is satisfied.” It should be noted here that among the conditions is a laundry list of health and safety measures. Neither side was willing to take unnecessary risks just to play baseball; and, at present, none of those terms appear to be at issue.

However, one of the conditions ends with the following words: “[T]he Office of the Commissioner and Players Association will discuss in good faith the economic feasibility of playing games in the absence of spectators or at appropriate substitute neutral sites.” And that is where we find ourselves today – playing games without fans.

You can read that contract language ten times and still not be exactly certain what those words were intended to mean. ESPN sent the language to four attorneys not involved in the negotiation, and they got two in favor of the owners and two in favor of the players. But any posturing about the intent or specificity of that language is irrelevant. If we ever get to a point where we are determining which side has a the “correct” interpretation, the season is lost; and so too may be the sport as we know it.

Gordon Gekko once proclaimed that “Greed clarifies, cuts through, and captures the essence of the evolutionary spirit.” But, in this particular case, greed may take that evolutionary spirit to its logical conclusion: extinction. There are 30 million people out of work in this country; unemployment is headed towards 20%. More than 85,000 Americans have lost their lives in the last few months alone. No one, and I feel pretty confident in using those particular words, wants to hear that baseball wasn’t played in 2020 because millionaire players (and, yes, I know, not all of them are millionaires) and billionaire owners stood on principle claiming they were “right.”

They are so many smart ways to square this circle – without relying on courts to interpret contract language. There are too many smart people involved in these negotiations to allow it to go that far. The New York Post’s Joel Sherman posited that, as with this upcoming draft, players agree to a base salary for this season, with the remainder deferred and paid over the next two years. This solves the teams’ cash flow issues in what is a $10.7 billion industry. Agree to that concept, and then all you have to argue about is the interest rate.

The owners have stated – without actually opening their books – that if the games are played without fans, they will lose 40% of their revenue, and some teams will lose more than if the entire season is simply canceled. Okay, then open those books. Maybe seeing their actual revenues is worth the financial hit this year, giving the players ample ammunition when they start their collective bargaining after the 2021 season.

If the owners are going to lose 40% (again, for our purposes we will take them at their word), propose to split the baby with the players, and each player takes a 20% reduction in salary. Now we could be getting somewhere. And, in return, each player gets a hotel suite on the road. Or each player is allotted an additional 20% of service time for the upcoming season. Or the players agree to a 25% haircut, but the owners agree that free agency can begin after five years, rather than the current six. Give and take; back and forth. This isn’t hard. But, as we have seen all too often, egos get in the way of practical solutions.

It was heartening that after Tuesday’s meeting with the players, there were no leaks to the press. That is a step in the right direction. This battle cannot be won in public; it can only be lost. And, to be sure, a loss for either side is a loss for both.

On this morning’s Baseball Tonight podcast, Buster Olney said that Rob Manfred and Tony Clark should lock themselves in a conference room and not come out until they have a deal. I couldn’t agree more.

As Carl Fox says to his son Bud in that same seminal movie, “Money’s only something you need in case you don’t die tomorrow.” In this time of great uncertainty, player and owners would be wise to heed those words.