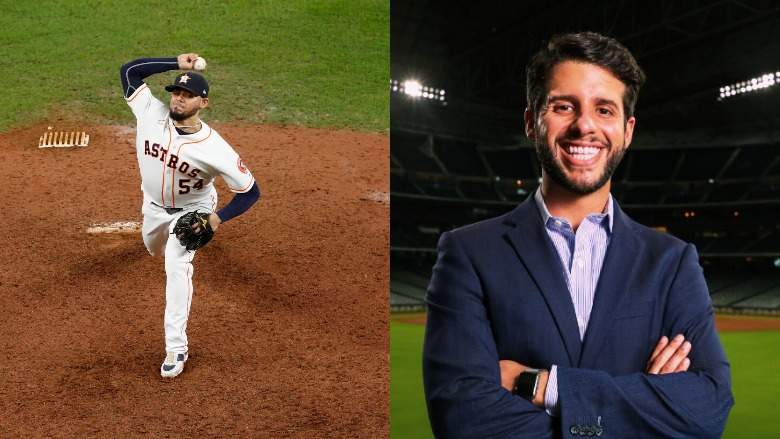 When I got home from work the other night, my 10-year old daughter had ink all over her arm. I asked her – maybe in a somewhat pointed way – what happened? She looked at her arm, and with feigned shock she said: “Hmm, that must have rubbed off from my paper.” I asked her if someone had written on her and she responded: “I don’t know.” Incredulous, I asked: “You don’t know if someone wrote on your arm?” And that is when the story fell apart and she acknowledged that she and her friend wrote on each other at school.

It was innocuous, frivolous, and thoughtless, but her first instinct – to avoid trouble – was to lie. She is not special. All (most?) kids do this all the time. (Well, I hope so. I would hate to be raising a sociopath.) We are all human, and we often take the path that we hope will offer the least resistance. Unfortunately, that path is often strewn with danger.

Which brings us to the non-baseball baseball topic of the week: Brandon Taubman and the Houston Asstros [sic]. I was speaking with a friend last night and asked him about L’Affair Taubman and he didn’t know anything about it. That reminded me that not everyone follows baseball as closely as I do; and not everyone lives in the baseball bubble – they have lives to live and non-sociopathic children to raise.

Here it is in a nutshell, but it does take some explaining. Here goes:

In 2018, Toronto Blue Jays pitcher Roberto Osuna was arrested on charges that he assaulted the mother of his child. The woman elected not to cooperate with the investigation, gathered her things, and fled back home to Mexico. But Osuna did not escape punishment. MLB suspended him for 75 games for violating the league’s domestic violence policy.

While under suspension, the Blue Jays essentially washed their hands of Osuna, trading him to the Houston Astros. The Astros are an organization steeped in analytics, run by many MBAs who started their respective careers in the banking, finance, and insurance industries. In short, they know a distressed asset when they see one; and they pounced on the opportunity to buy low on Osuna – a 23-year closer with an electric arm and allegedly a closed fist.

Much ink has been spilt about the poor optics of this decision, and the Astros were appropriately scorned for this trade. But, for all intents and purposes, over the past fifteen months the rancor dissipated. Until this past Saturday night.

Osuna came into the ninth inning of Game 6 of the ALCS with a chance to send the Astros back to the World Series. He failed. He gave up a game-tying two-run home run to DJ LeMahieu. He was, of course, bailed out by José Altuve in the bottom of said ninth inning, and Houston got to the World Series in spite of Osuna’s metldown.

In the midst of the clubhouse celebration, Astros Assistant General Manager, Brandon Taubman, got a little carried away. With a cigar in his mouth and a champagne bottle in his hand, he repeatedly (read: at least six times) yelled: “Thank God we got Osuna! I’m so fucking glad we got Osuna!” This was an odd time to be that exuberant, insofar as Osuna had just nearly blown the game. This was a horrific thing to shout for a bunch of other reasons as well.

Taubman apparently screamed this to, or in front of, or near, three female reporters, one of whom was wearing a purple domestic violence awareness bracelet. At first blush, there was no apparent reason for this outburst. But then we learned that Taubman had previously complained about the bracelet-wearing woman – he was unhappy with her tweets addressing domestic violence. The incident was so outlandish that an Astros staffer reportedly apologized for Taubman’s behavior in the immediate aftermath.

On Monday, Stephanie Apstein, a reporter for Sports Illustrated, and one of the recipients of Taubman’s tirade, reached out to Gene Dias, the Astros media relations director, to explain what she intended to write, and to ask if he, the Astros, or Taubman had a comment. Dias, apparently, rejected all three offers. So Monday night Apstein published her story.

That is when this whole thing became like the incident with my 10-year old daughter. My guess (and, truth be told, this is only a guess) the following is what transpired next:

So, about one hour after Apstein’s story hit the internet, the Astros put out the following statement:

“The story posted by Sports Illustrated is misleading and completely irresponsible. An Astros player was being asked questions about a difficult outing. Our executive was supporting that player during a difficult time. His comments had everything to do about the game situation that just occurred and nothing else – they were also not directed toward any specific reporters. We are extremely disappointed in Sports Illustrated’s attempt to fabricate a story where one does not exist.”

Jeff Passan, Joe Posnanski, Buster Olney, Yahoo Sports, the Baseball Writers Association, and countless others have opined about this hogwash and how dangerous it was to the integrity of a sportswriter, so there is no need for me to pile on. Suffice it to say that at least four other members of the press immediately corroborated Apstein’s account and disputed the drivel offered by Houston’s front office.

Despite their best (worst?) efforts, when the issue wouldn’t just “go away,” when the “the ink just rubbed off on my arm” was being met by a cynical press corps, the Astros had to try again. Taubman tried his hand with the following:

“This past Saturday, during our clubhouse celebration, I used inappropriate language for which I am deeply sorry and embarrassed. In retrospect, I realize that my comments were unprofessional and inappropriate. My overexuberance in support of a player has been misinterpreted as a demonstration of a regressive attitude about an important social issue. Those that know me know that I am a progressive and charitable member of the community, and a loving and committed husband and father. I hope that those who do not know me understand that the Sports Illustrated article does not reflect who I am or my values. I am sorry if anyone was offended by my actions.”

When an equally feckless statement from Astros owner Jim Crane failed to move the societal needle, MLB stepped in and sent their own investigators. It took 72 hours, but on the fourth try, after being asked “do you really expect me to believe you don’t know if someone wrote on your arm?” the Astros issued the following statement:

Our initial investigation led us to believe that Brandon Taubman’s inappropriate comments were not directed toward any reporter. We were wrong. We sincerely apologize to Stephanie Apstein, Sports Illustrated and to all individuals who witnessed this incident or were offended by the inappropriate conducts. The Astros in no way intended to minimize the issues related to domestic violence.

Our initial belief was based on witness statements about the incident. Subsequent interviews have revealed that Taubman’s inappropriate comments, were, in fact, directed toward one or more reporters. Accordingly, we have terminated Brandon Taubman’s employment with the Houston Astros. His conduct does not reflect the values of our organization and we believe this is the most appropriate course of action…”

The irony of all of this – what I tell my kids each and every time they try this bullshit – is that there was no need to lie, and the issue could go away with a simple “I’m sorry.”

In an alternate universe, when confronted with his aberrant behavior, Taubman could have said: “Man, I was so excited, and maybe a little tipsy on champagne, and I said something really stupid. I regret what I said and sincerely apologize to those writers.”

And in that same alternate universe, the team could have issued a statement saying: “One of our executives used poor judgment and used wholly inappropriate language in the clubhouse. We take these matters seriously. We have suspended Brandon Taubman for four weeks without pay, we have made a $500,000 donation to the Texas Council on Family Violence, and we – as an organization – sincerely apologize to the objects of this outburst as well as anyone else who witnessed or was affected by it in any manner.”^^

They could have done this on Monday, and by Tuesday there would not have been a story. Taubman would have been back at work before the winter meetings, and the Astros would not have engendered a level of ill-will not seen since…they acquired Osuna in the first place.

It is just so easy: Tell the damn truth. I sound like a broken record to my kids, but for the benefit of the entire Astros organization, here goes: Whatever it is, lying only makes it worse!

^^One last note: Moments before this posted, prior to Game 3 of the World Series, Stephanie Apstein met with Jeff Luhnow and asked that the original press release – the one that impugned her integrity and claimed she made the whole thing up – be retracted. Luhnow would not commit to doing so. Go Nats!