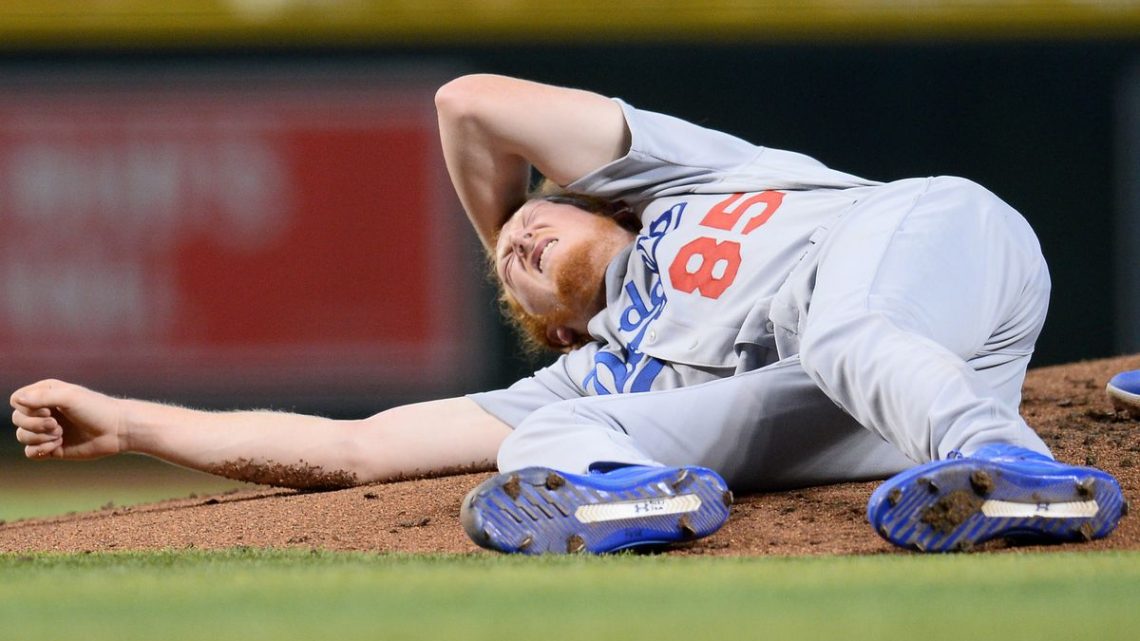 In honor of Dustin May’s 22nd birthday, there is an issue that has been on my mind for a while.

When my son was seven years old, he took a comebacker to his left eye. On impact, he dropped to the ground, the batter advanced to first base, and, as you might expect, everything stopped while the coaches tended to his wound. Although this was just a scrimmage, I have no doubt that had this been an official Little League game, nothing would have been different about the chain of events. However, as you move up levels, and the games have higher stakes, that is not necessarily the case.

Last week, in the fourth inning of a game in Arizona, with the bases loaded and one out, the aforementioned Dustin May took a line drive off his head. And, true to form, he hit the ground (a point that I have not yet heard: the impact of his head on the mound from the fall may have been worse than the one on his head from the ball – watch the video). The ball deflected into left field, and two runs scored. But here is the existential question: Should both of those runs been allowed to score?

As many of you know, they are trying out a slew of new rules to improve (?) the game in the Atlantic League this year. Among the “robo ump” and “stealing first base,” there is no rule with respect to potentially catastrophic on-field injuries. Maybe there should be.

When a batter gets beaned in the head, it is – by rule (5.05(b)) – a dead ball. And thus everyone has time to stop and make sure we don’t also have a dead player. The same is not true for a beaned pitcher. When a batter crushes a ball off the pitcher’s skull, the play remains live until its logical end, at which point time is called and the player is attended to. Should we be so callous? Would it be better to let the ball fall wherever it may, and then rule the play dead immediately?

There have been instances in which a ball goes off the pitcher and the defense catches it on the fly, resulting in an out. There have been instances in which the ball strikes the pitcher and then goes out of play, resulting in a dead ball. But what about when, like with May, the ball ricochets into the outfield and runners circle the bases while a man lies helpless in the middle of the diamond?

My simple suggestion is that except when the ball lands in a fielder’s glove, the batter is awarded first base and every runner advances ninety feet. It is neat, easy, and clean. With this rule in effect, no one needs to hustle to anything other than the care of their fallen comrade. We shouldn’t see left fielders making throws to the plate, or runners trying to score from second amongst the confusion and agony. That is, quite simply, untoward.

When you dig down beneath the “play the game the right way” bromides, what exactly is meant? The concept, in essence, is to be human and be a good sport. How does taking extra bases while a player is lying in who knows what state of injury or consciousness make you human or a good sport? And yet, I have never once heard an “old school” player or manager or announcer do this analysis. In their view, on the one hand, don’t show emotion as it is disrespectful to the opponent; but on the other hand, don’t show humanity because it is, what exactly? A competitive disadvantage?

When you watch videos of pitchers taking liners off their heads (and I watched too many in preparation for this), your breath catches. Every batter finds himself stunned, trying to process what just happened, what he just did. It goes without saying that taking a ball hit 100 MPH off the cranium is scary for everyone involved. I am just saying everyone involved (baserunners included) should treat the moment with the solemnity it deserves.