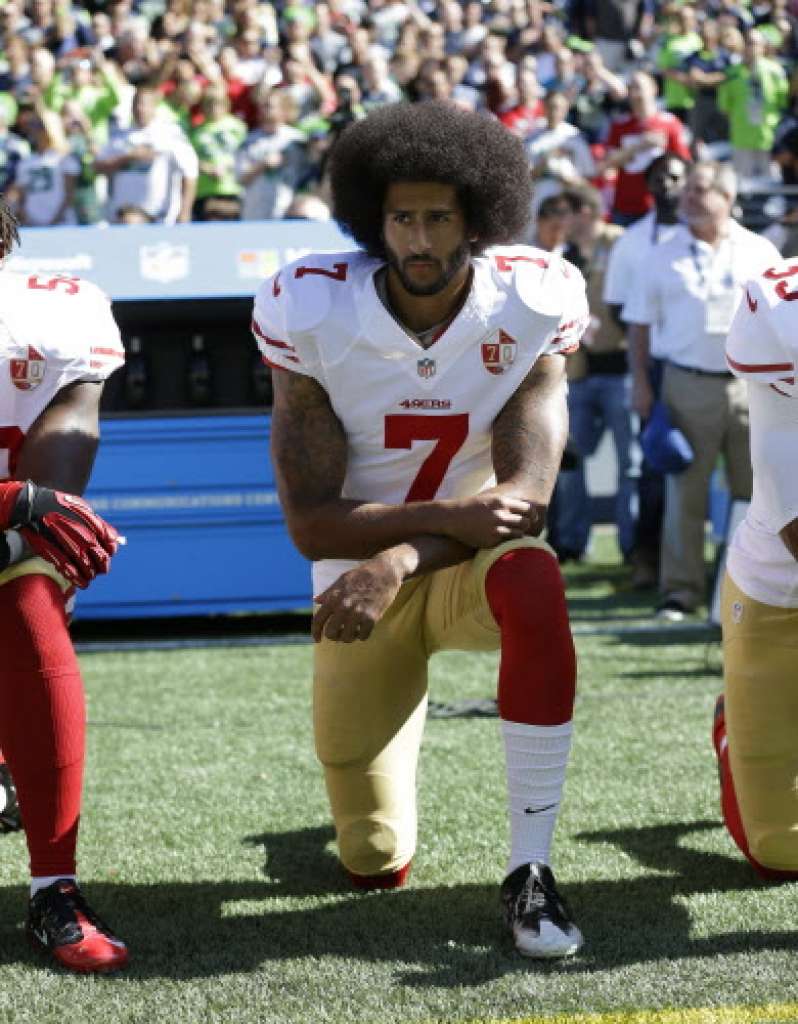 Sometimes the horse gets out of the barn, the toothpaste gets out of the tube, the water goes under the (Golden Gate) bridge. Sometimes the words you say are not the words the listener hears. Sometimes people have the best of intentions, and then other people co-opt those intentions. And sometimes, because of that co-opting, the original message gets lost in the noise that said message created. We live in cacophonous times.

Normally I write about baseball and how it relates to life. And because a little-known Oakland A’s catcher, the bi-racial son of a career military officer (who Jeff Passan wrote about wonderfully), elected to “take a knee” during the national anthem last week, I have been given an opening to write about this topic. But because it is my want, I will focus on its genesis.

Back on August 14, 2016, when Barack Obama was still President (an important note), before the San Francisco 49ers’ first pre-season game, Colin Kaepernick decided to sit during the national anthem. He sat again the following week. No one seemed to notice. It wasn’t until after the third pre-season game, on August 26th, when a reporter’s curiosity was piqued, that Kaepernick addressed the issue. He released a statement that he was sitting because of the oppression of people of color and ongoing issues of police brutality. Two days later he met with the media and told them:

“I’m going to continue to stand with the people that are being oppressed. To me, this is something that has to change. When there’s significant change and I feel that flag represents what it’s supposed to represent, and this country is representing people the way that it’s supposed to, I’ll stand.

I have great respect for the men and women that have fought for this country. I have family, I have friends that have gone and fought for this country. And they fight for freedom, they fight for the people, they fight for liberty and justice, for everyone. That’s not happening. People are dying in vain because this country isn’t holding their end of the bargain up, as far as giving freedom and justice, liberty to everybody. That’s something that’s not happening. I’ve seen videos, I’ve seen circumstances where men and women that have been in the military have come back and been treated unjustly by the country they fought have for, and have been murdered by the country they fought for, on our land. That’s not right.”

But these are his own words. More than thirteen months ago, long before Trump, long before Charlottesville, long before Alabama, and before the NFL, corporate sponsors, and fans in the stands had their say, Colin had his. But, as we know, we don’t always get to control the narrative. The claim was that Kaepernick had a bad season (even though his 2016 stats pretty closely resemble his 2012 stats, when he led the Niners to the Super Bowl, but I digress), and no team wanted a washed-up quarterback who comes, standard, with a political headache. For purposes hereof, we can put aside Kaepernick’s qualifications to play in the NFL today. The fact is, he is unemployed, and others have taken up his cause.

In Week 1 of the current NFL season, four players either knelt or sat during the national anthem; the same four did so in Week 2.

And then, on September 22nd, President Donald Trump went to a campaign rally in Huntsville, Alabama, and described football players who kneel during the national anthem as “sons-of-bitches,” and called for them to be fired. For purposes hereof, we can put aside the First Amendment and whether or not such a firing would be a violation thereof.

Trump’s speech was between Weeks 2 and 3. After Trump spoke, more than 200 players kneeled. What were they kneeling for? Did they even know? Do we?

Do the fans who booed their favorite players and their cherished teams, do the announcers who broadcast and highlight the protests, do the pundits who landed – firmly – on one side of the issue or the other, even know the why of what is happening on the gridiron? The obvious answer, of course, is “no.”

The players have taken a knee, locked arms, and raised their fists; but they have not spoken out. So, because nature abhors a vacuum, social commentators, thought-leaders, craven politicians, and bombastic demagogues all felt compelled to offer their own explanations.  The upshot: the rallying cry of “stand up nation” is that the players are disrespecting the military, the flag, and the country. Reasonable minds can differ – and have, vociferously – as to whether or not kneeling is disrespectful to any of the above. But that discussion wholly misses the point. No one is kneeling to intentionally disrespect the military, the flag, or the country.

However, some, nay many (from 4 to over 200), may be kneeling to disrespect the President of the United States who has chosen through words and (lack of) action, to divide this country. People have taken to calling him the “Divider in Chief,” and I don’t think the President would dispute or condemn that appellation. Sadly, this is just where we are.

Unfortunately, in all the noise, the message – Kap’s original message – is now lost. To the extent this was ever about the military, the flag, or our country, it was about love of country, what the flag should represent, and the ideals that members of our military shed their blood for. The act of kneeling was not intended to be disrespectful, it was a yearning for our better selves. Ironically, Kap knelt to Make America Great.

But, again, that message has been muddled and muddied. So players, and owners, and league officials began meeting to try to find a way forward – not necessarily a way through or a way out – but just forward, without alienating a large portion of the fanbase or a large number of sponsors. They all felt the need to put this genie back in the bottle, but could not come up with a magic elixir.

If the players intend to continue kneeling, incurring the wrath of the boo-birds, and risking their careers and potentially their lives, without offering more than a well-written Op-Ed in the New York Times, this will end badly, if it can ever end.

In moments like this, I like to reach for the sharpest instrument in the tool box: Occam’s Razor.  The easiest solution is just to tell people why; answers their questions; appeal to their humanity; ask them to respect you, even if they don’t respect your actions.

Will this solve the problem, absolutely not.  But it will cut out much of the noise; it will mitigate people’s attempts to co-opt the message; it will provide much-needed context. The logical next question is how? Here is how:

Before each Week 5 game, the captains of both teams come to mid-field prior to the singing of the national anthem. They will deliver a statement written/approved by/with the NFL Players Association and the Commissioner’s Office. The same message will be read at 14 stadiums before 14 games (four teams have byes), in front of an average live audience of 70,000, plus millions more at home. It won’t take but a minute or two. If it were up to me, I would either read Kaepernick’s original words (as set forth above) or the statement put out by the Indianapolis Colts earlier this week:

“Recently, there have been several misperceptions regarding a personal choice made by members of our team to bring awareness to prevailing issues facing our nation. To be clear – those of us who kneeled did not intend to disrespect our flag, our national anthem, or those who serve our country. We all have family and friends who are servicemen and women. We appreciate and respect the incredible sacrifices they make.

But as NFL players, we have a platform. And as Americans, we have a responsibility to speak up for those who cannot speak for themselves. Our intention was to raise awareness and to continue critical conversations about real equality, the injustices against black and brown people, police brutality, respect, unity, and equal opportunity. Our players are hurting, our people are hurting, our neighborhoods are hurting, and kneeling was a direct response to that hurt.

But what makes football so special is the way it brings people together – fans, players, coaches, all of us. We represent different races, backgrounds, and beliefs, but we come together for a common goal. That togetherness seen on the field and in the stands when we play should resonate even when we leave the stadium.

In that same spirit, as unified Americans, we will respect all forms of peaceful protests, as they are protected under the First Amendment of the U.S. Constitution. Some of our players may kneel, while others may stand. But this is just the beginning. There is much work to do, and it will take all of us.

We are in a era of social turmoil not seen in at least a generation. But we will not get through this if we cannot speak, and cannot be heard. Every Sunday there is a captive audience – let the players use it to heal, whether or not they kneel.