TOTAL ECLIPSE OF THE PARK

TOTAL ECLIPSE OF THE PARK

Shortly after the first of the year, while listening to one of my favorite podcasts, I was clued in to an event happening in Keizer, Oregon, eight months hence.  At the time, I had little knowledge of the impending total solar eclipse; had never heard the phrase “path of totality”; and didn’t know the city of Keizer, Oregon even existed.  But the idea of travelling to a baseball game, to meet a bunch of baseball writers, and to be part of a communal event that happens maybe twice in a lifetime, was all simply too much to pass up.

After a few keystrokes, I learned that the Salem-Keizer Volcanoes – a Short-Season Class-A affiliate of the Giants – would be holding a four-day event around the first solar eclipse to run from coast-to-coast in 99 years.  The long weekend was to be hosted by the Volcanoes, baseball writers from FanGraphs, and a team of engineers and scientists from NASA.  This stood to be entertaining and educational.

I quickly contacted the Volcanoes ticket office and bought the Eclipse Package: tickets to Sunday’s and Monday’s games; breakfast at the park Monday morning; a parking pass; and a guaranty of NASA-approved eclipse viewing glasses.  Little did I know, at the time, what a global phenomenon the eclipse would become; what it would cost to travel to Oregon; and what an amazing experience this would be.  Now I know.

Last Saturday our whole family traveled to Portland.  After a night in the Rose City, we headed 45 miles south to the state’s capital.  Repeated warnings had braced us for Carmageddon-level traffic, but the ride was smooth and we got to town in less than an hour.  On Monday morning, my son and I woke at the crack of dawn to meet 5,000 like-minded fans/sky-watchers at Volcanoes Stadium.  We grabbed ballpark breakfast (think: camp) and milled amongst baseball fans and science nerds.  The air was cool, the sky was blue, and the crowd was atwitter.  We were three hours from “totality”.

Monday morning’s game against the rival Hillsboro Hops – scheduled to start at 930am – was delayed because the opponents got stuck in traffic.  (You’ve got to love Single-A baseball!)  The Volcanoes gave up four runs in the top of the first, while we sat in the stands wondering if it was the sight-lines at the stadium, the game time, or the encroaching moon, that caused the viewing experience to be less than optimal.  NASA soon answered the question, delaying the game before we reached the home half of first, due to lack of light. 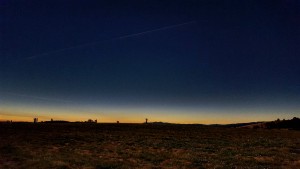 And that is when the suspense really took hold.  Players dropped their gloves and copped a squat along the baselines.  There was a buzz in the stadium as we donned our glasses and felt the air drop by as much as 12 degrees.  There was a light breeze, and we watched what appeared to be a sunset along the horizon – at 1015 in the morning. 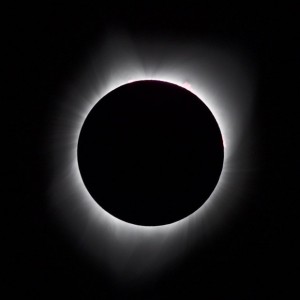 And then, within moments, the NASA engineers instructed us to remove our glasses, and we witnessed “totality”.  For nearly two minutes, the sun fought valiantly to overcome the moon’s obstruction, to little avail.

People who know of our trip have asked how it was.  Unfortunately, I am not a skilled enough writer to properly explain the experience, other than to state that I have chills just remembering it.  But, lucky for us, Ben Lindbergh was there – as part of the FanGraphs host committee – and he articulated with such prose that it makes me want to hang up my keyboard.  Please read his account.

I have joked with my sisters about Niagara Falls in 2024; and I now think there is a fair chance I will be there (April 8th, if you are planning ahead).