A FIGHT NOT WORTH FIGHTING

A FIGHT NOT WORTH FIGHTING 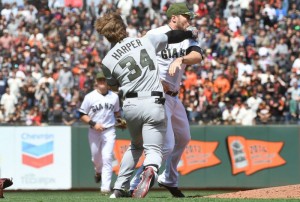 In the eighth inning of Monday’s Giants-Nationals game, with the Nats ahead 3-0, Hunter Strickland decided to seek revenge.  For what, you ask?  For an overly-aggressive slide into Brandon Crawford at second base?  For a little chin music too close to Joe Panik’s baby face?  How about a bat flip and slow trot around the bases by Hunter Pence.  Any of the above would be “justified” (if, by justified, we mean baseball’s anachronistic concept of frontier justice that we have seen on display all too often of late).  It would have been totally out of line, but it would have in keeping with the traditions of America’s Pastime.

If you guessed any of the above, you would be wrong.  And if you are reading this, my guess is that you already know the answer.  Back in the 2014 playoffs, Bryce Harper – he of the flowing locks and face paint eye black – hit two tape measure homeruns off Mr. Strickland.  One went about 450 feet, and the other landed in McCovey Cove.

Strickland didn’t take too kindly to Harper’s appreciation of those dingers, nor his glance back to the mound as he rounded the bases.  So Strickland stewed in his juices for 30 months (baseball players have LONG memories and short fuses).  He waited until the time was just right, and then he drilled Harper in the hip with a 98 MPH fastball.  Now Mr. Harper is no shrinking violet, and he – in his own words – “saw red”.  First he pointed his bat, then he ran towards the mound, then he flung his helmet in what can only be viewed as the worst helmet toss of all time – and then he let loose with a fusillade of punches.

All the while, Buster Posey, the Giants catcher and the face of the franchise, didn’t move.  When Harper started barking at Strickland, Posey made no effort to restrain him.  When Harper started running towards the mound, Posey calmly cleaned the dirt around home plate.  It was not until six seconds after the pitch hit Harper – and after the first punches were actually thrown – that Posey even feigned an interest in the melee.

So, after the talking heads got done castigating Strickland for “getting even” (?) nearly three years and a World Series title later, and after they got done making fun of Harper’s helmet tossing skills, they turned their attention to Buster Posey.  Was Posey’s failure to intervene an act of cowardice, a show of grace, a selling out of a teammate, bad sportsmanship, good sportsmanship, just good ol’ common sense, or what?

When asked about it after the game, Posey said: “Well, I mean, after it happened, I kind of saw Harper’s point.  Next thing you know, he’s going out after him. Those are some big guys tumbling around on the ground. You see, [Giants first baseman] Mike Morse is about as big as they come, and he was getting knocked around like a pinball. So … (it’s) a little dangerous to get in there sometimes.”

Posey told his truth.  Strickland was out of line and Buster was having none of it.  Some have argued that players must have their teammate’s back, no matter what.  That Posey had an obligation to at least try to slow Harper down, if not tackle him outright.  Some have argued that this was a mess of Strickland’s making, and his teammates shouldn’t put themselves in harm’s way to settle a score that had no business being settled.

Although the Giants have been lackluster so far this season, Posey leads the team in hits, batting average, OBP, OPS, and WAR.  He is far and away their best player, and the player they can least afford to lose.  Should he risk an injury or a suspension to defend a red-assed teammate who was first offended back when Ebola was making news?

Some say, “Yes; yes he should”.  To them, I would ask that they indemnify the Giants for that portion of the $21.4M Posey is making this season and the additional $85.6M he owed through 2021 – all money potentially at risk if Buster got injured in that scrum.  This wasn’t defending honor or getting valid retribution.  This was a case of arrested development; a player too immature to deal with another player’s success against him.

If you don’t want guys hitting the ball a country mile and then enjoying it, pitch better.  Oh, and by the way, this wasn’t some Punch and Judy who took you deep.  This was the second best player in the game, who had a 1.251 OPS in those playoffs.  And, oh, by the way (Part II), you won the friggin’ World Series not three weeks later.  Get the hell over it.  And if you can’t, don’t expect others to join you in your little Bryce Harper-invited by a 98 MPH fastball pity party.

Serve your suspension, Hunter.  And when you come back, do us all a favor and just…