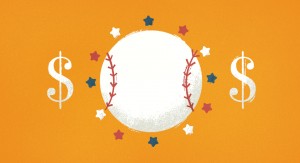 Last season, Clayton Kershaw earned approximately $34.5 million.  On June 30th, the Dodgers placed him on the 15-day disabled list, and on August 3rd, Kershaw was moved to the 60-day DL (retroactive to June 30th).  Nonetheless, Kershaw received a check of approximately $2.65 million every two weeks (MLB players are paid over the course of the regular season).  And each time one of those checks was cut (a total of nearly $11 million while he was sidelined), it counted against the Dodgers’ Competitive Balance Tax threshold (“CBT”), also known as the “Luxury Tax”.

The CBT was first introduced for the 1997 season, and imposed a 34% tax on all monies spent above the average between the fifth and sixth largest team payrolls.  That system lasted until 1999, and then the entire idea went on hiatus until the 2003 season.  Beginning in 2003 – and still going today – a threshold level is set, and teams are charged if they have payroll in excess thereof.  This removed any comparison to other teams.  You spend, you pay.

Which takes us to the current Collective Bargaining Agreement, and the new thresholds.  In 2016, the CBT was set at $189 million, and next season it will rise to $195 million.  But, to truly understand the implications, you need to go inside the numbers.

Throughout the year, we follow a team’s salary obligations, with reporters providing fans with “real time” tallies of what a team is spending, how close they are to the “cap”, and the desire to avoid the Draconian penalties assessed if they go over (more about that below).  But the figures we hear and read about can be deceiving, and they are very difficult to calculate.

Each November, a team of really smart people in the Commissioner’s office in New York tabulates each team’s prior season’s salaries.  In theory, it is easy math.  In theory.  Here are a few rules:

When the MLB accountants and the team accountants exchange books, their numbers often vary.  This is especially true for teams not accustomed to playing in the tall weeds.  For instance, the Dodgers have at least four members of their staff assigned to salary cap issues – which makes sense as they deal with the CBT every season.  A team like the Athletics or the Rays may not have anyone assigned to this task, as doing so would be akin to being having someone assigned to review Curt Schilling’s liberal Tweets.

So why is the CBT so important?  Here is why, and it might help explain some of the (non)moves made by teams (such as the Red Sox) this off-season:

Next season’s CBT threshold is $195 million (about $182 million in salaries, but let’s not get too wonky).  Under the new CBA, the first season a team goes over the CBT, they are charged an assessment of 20% of the overage, the second time, 30%, and each time thereafter, 50%.  The analysis cannot stop there.

If a team is over by between $20-$40 million (i.e., by spending $215-$235 million next season), there is an additional 12% surcharge on the excess amounts.  But, and this is the big “but”, when a team drops below the CBT threshold, they reset for future seasons.

Let’s take a look at the Red Sox, who were over the CBT last season.  Let’s assume that once they set their 40-man, finish their arbitrations, and pay the player benefits, they are right at $195M (which is a reasonable assumption).

And, by doing so, they would severely limit their room to maneuver at the trade deadline and/or if they suffer any injuries.  Many fans may still quibble with the Red Sox’ parsimoniousness, but at least there is a valid, long-term business reason why not to make that deal.

The CBT is complicated and ever-shifting.  Teams have to be wary from the first day of the Hot Stove, until their final call-ups in September, all the way through Awards Season.  One slip up can cost millions of dollars and have implications for multiple seasons.

So, the next time you hear Jason Heyman or Ken Rosenthal or Brian Cashman or Andrew Friedman wax eloquent about the Luxury Tax and its effect on teams, you will have a better understanding of what they mean, why it’s important, and how poor these teams really are.