Colin Kaepernick is on the cover of this week’s Time Magazine.  Did he win a Super Bowl, or save a drowning baby?  No.  He merely took a knee.  A small gesture, no larger or physically more significant than raising a gloved hand to the sky.  But sometimes small gestures have a long and lasting impact.

There is no reason to re-hash what Kaepernick started, the implications of the movement, the rightness or wrongness of the act, or the legality thereof.  All of those issues have been addressed, many times over, by people smarter, better read, and more articulate than me.  What I will say, however, is that by speaking (kneeling) his mind, Kaepernick may have opened the door to other, less thoughtful, athletes thinking that they, too, should speak (or Tweet) their minds.

Rosters and scrapheaps are strewn with athletes making (or attempting to make) righteous political stands.  Sometimes these hit the mark and lead to real change; and sometimes they are epic fails.  The best example of the latter may have happened just yesterday.  Take a journeyman catcher with a misguided view of the world, a poor grasp of facts, and a smart phone, and you have a combustible combination.

Steve Clevenger began his career with the Cubs in 2011 (2 games/5 ABs), moved to Baltimore in 2013, and is now in Seattle.  His illustrious career includes a .227 BA, 4 HRs, 48 RBI, and a .608 OPS.  So who better to thrust himself into the limelight and do and say something utterly contemptible while his teams is vying for a Wild Card birth?

As this election season has shown us, people are angry and they seem to have no compunction about expressing that anger in public.  And this has led people to do and say things that, in a more genteel time, they would never think to do or say (publicly, at least).  The Trumpifcation of our national discourse has left us with the idea that nothing is out of bounds.  Well, this morning, the Seattle Mariners reminded us that some things are still out of bounds.

When a black man was shot and killed in Charlotte, North Carolina, people protested.  There are many questions about the circumstances of the shooting (how and why we cannot know the difference between a book and a gun is beyond me, but I will leave that to those with more forensic experience than I).  In any event, a community felt aggrieved, and they utilized their First Amendment right to peaceably assemble.

After seeing, hearing, reading about the goings-on in Charlotte, Steve Clevenger deemed it important to shed some light on the topic.  He felt that he, a white, professional athlete from an affluent suburb of Baltimore, who makes more than half a million dollars per year, had a particularly insightful view of this situation; and, in a sign of the times, felt compelled to share the same with his 2,480 Twitter followers.  Herewith, his elegant prose: 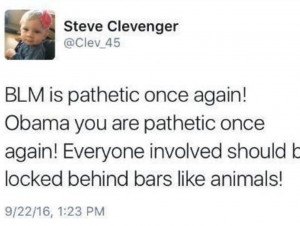 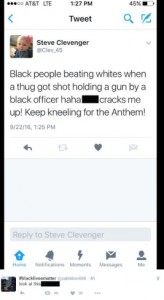 The Mariners acted swiftly.  Ostensibly under Article XII.B. of the MLB Collective Bargaining Agreement (Conduct Detrimental or Prejudicial to Baseball), the Mariners effectively fired Clevenger, suspending him for the rest of the season without pay.  Kudos to Jerry Dipoto and the entire organization.

Now it is up to the other 29 teams to not sign this piece of trash next season.  He is a free agent; and any team that employs him is willingly making him their representative – on the field and off.

We seem to live in a world where words have no consequences.  People – political figures included – can compulsively lie, and we shrug our shoulders.  People can go on television and the Internet and race bait and not get called out.  People can incite violence, and not feel the wrath of that which they have provoked.

I told my son, just the other day, in real life you have certain freedoms, but you must be prepared to deal with the consequences of exercising those freedoms.

It is time for the Steve Clevengers of the world to deal with the consequences of exercising their freedoms.  I whole-heartedly defend Clevenger’s right to write that which he wrote; but I also whole-heartedly believe that a private institution – like Major League Baseball – need not avail itself of the racists in its midst.

So, here’s to hoping that this is something that Steve Clevenger will never again hear on a Major League diamond . . .