A little over a year ago I wrote about what I truly love about baseball, the two strike pitch.  Nothing can really top that.

However, last night at Dodger Stadium, I witnessed a close second.  In July of 1991, on a hot Sunday afternoon, I was lucky enough to watch “El Presidente” throw a no-hitter.  It was 91 degrees that day, which is something like 200 degrees in the yellow box seats at Chavez Ravine), and yet nearly all of the 45,560 in attendance stayed until the final out.

There is really nothing like what happens at a ballpark around the seventh inning when the second column of the scoreboard reads “0”.  It doesn’t matter if it is the home team or the visitors – the crowd begins to sense history.  Each pitch, each swing, each slow roller, takes on even more importance.  If the game is close (1-0, 2-0), then every at bat has dual meaning, and fans aren’t really sure for which outcome they are rooting.

And typically, because the Baseball Gods are a fun-loving group, these games include at least one (and often more) incredible play by a defender – a play that probably would not have been made if the pitcher had already given up 5 hits; a play that could not have been made if the ball had been hit off a middle reliever.  But there is something about that moment, when the back of the seat is superfluous and finger nails become a thing of the past, that brings out the best in each competitor.  Last night was no different.

We need not even get into the conversation of the Perfect Game.  Players will tell you how nervous they are on defense – how, for the first time since Little League, they are praying the ball does not get hit to them.  Imagine a football player ever saying he doesn’t want the ball thrown to him; imagine a basketball player saying he doesn’t want the final shot.  For sheer honesty and candor, baseball players are the best.  But I digress.

ESPN has taken to sending No-Hitter Alerts to your phone.  The MLB Network will cut into games where a no-no is in progress.  But you cannot properly explain what it is like to see/feel a no hitter in person.  There have been 252 no hitters thrown since 1901; nearly two per season, so they are not that rare.  (By contrast, there have only been 4 twenty-strikeout games…in history.)  No matter.  No-hitters are still a thing of beauty.

The tension begins to build around the time we sign “Take Me Out to the Ballgame”; if you are watching closely, you will see that teammates avoid the pitcher in the dugout.  The spectators start to gets antsy, and beer lines begin to get considerably shorter.  And fans who would normally make an early exit to beat traffic, find themselves safely ensconced – in for the duration.

Last night, on one of those Chamber of Commerce, picturesque evenings above downtown Los Angeles, Matt Moore came within one pitch of adding another name to the list of 252.

“A little flair into right field, it’s gonna drop.  A bloop single to right field . . . 133 pitches, and a blooper to right . . . and so it goes in this great game.  It seems almost unfair.”  The poetry of Vin Scully.  Of course Vin Scully would be smack dab in the middle of this game; the Baseball Gods would have it no other way.  Vinny fell just shy of calling his 21st no-hitter in the waning days of his storied career.

While it was “almost unfair” to Matt Moore, it was quite unfair to these guys:

On June 3, 1995, Pedro Martinez threw a perfect game for nine innings.  27 up, 27 down.  But then Bip Roberts dropped a line drive just inside the right field line to lead off the 10th, and the perfecto was no more.

That may sting, but that ain’t no Harvey Haddix: On May 26, 1959, Haddix retired the first 37 batters he faced (37!!) before Joe Adcock doubled and eventually scored in the 13th.  No perfect game, no no-hitter, no shut out, and no win for Poor Harvey. 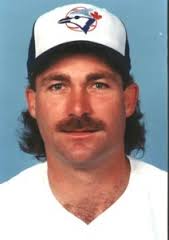 But, for my money – and my memory – nothing can or will top the week of September 24-30, 1988.  Before Kirk Gibson jump-started his legs and hooked a Dennis Eckersley slider into the right field pavilion; before Orel Hershisher cemented his place in baseball lore, there was Dave Stieb.  Some made not remember the mustachioed right-hander from Toronto, but I sure do.

Coming off a 4-hit complete game shutout against the Indians, Stieb was throwing a gem at the old Municipal Stadium in Cleveland on September 24, 1988.  He had recorded 26 outs, and had Julio Franco 0-1.  Franco hit a slow bouncer up the middle that took one of the weirdest hops in the history of the game (see video below), ending the no-hit bid.  Stieb then retired Dave Clark to secure the 1-0, one-hitter.

Six days later, Stieb took the hill at the old Exhibition Stadium in Toronto.  He proceeded to record the first 26 outs before Jim Traber came to the plate.  At this point in his career, Traber had played less than 200 games and recorded about 125 big league hits; he wouldn’t record even 50 more.  But on this night, on a 2-2 pitch, Traber flared a ball into the no-man’s land behind first base, bringing heartache (x2) to Dave Stieb.  How could that happen?  Why did that happen?

Well, the Baseball Gods were not yet done with Mr. Stieb.  Not a year later, Stieb was throwing a Perfect Game with two outs in the 9th, when Roberto Kelly lined a double down the left field line.  The third time was not a charm.

However, Stieb was not to be denied.  In 1990, Dave finally bested the Indians and the Gods, throwing his one and only career no-hitter.

One other fun fact: After the back-to-back one-hitters to close out 1988, in Stieb’s second start of 1989 he took a no-hitter into the 5th inning, and finished his third one-hitter in four starts.

So Matt Moore is in illustrious company.  And, when he thinks back on what might have been, he can take just a touch of solace in the fact that – since 1961 – there have 148 other no hitters broken up in the ninth inning or later.  And in the last five seasons, six no-hit bids have been broken up with two outs in the ninth.

And, lastly, he can take some cold comfort that he is not Armando Galarraga: