THINK OF THE CHILDREN!

THINK OF THE CHILDREN!

Another January, and another life-changing day for a former Major Leaguer.  And another day, week, month (?) of hand-wringing over the votes, the voting process, and the eventual end of the world as we know it because some former athlete (?) won’t be honored on a hot summer day in upstate New York.

Too many words have been written – over the past few weeks especially – regarding the Hall of Fame and PEDs and protectors of the game and morality police and integrity clauses, etc., etc. for me to think I can add anything interesting to the canon.  And yet, I do.

We have heard from esteemed writers, analysts, and pundits about why the Rule of 10, about why the 10-year limitation, about why the 5% threshold, about why the now-ever-so-important integrity clause, are all shams, and merely in place to keep deserving players out of the Hall of Fame.  By and large, I agree with most of the theories.  A quick rundown for those of you not steeped in the inner workings of Hall of Fame voting rules:

The Rule of 10 is ridiculous for the simple reason that, in some years, there are more than 10 deserving candidates.  A writer shouldn’t have to make some Job-like decision as between equally qualified players just to fit within a 10-person box.  And if people are really worried that opening this up to a simple “Yes” or “No” vote will throw open the Hall’s doors to David Eckstein and Mark Grudzielanek, the 75% requirement should quell their concerns (Ed. Note: A player needs to be on at least 75% of the ballots to gain entry.)

The 10-Year Limitation, when read in conjunction with the Rule of 10, disqualifies certain players just when they are getting some momentum for potential induction.  Do you believe Edgar Martinez will get an additional 32% of the votes over the next 3 years – especially when he is competing with other players within the Rule of 10?  The old rule allowed for 15 years of eligibility, and it was no skin off the Hall’s back to keep that in place.  The new Rule of 10 has created a logjam of potentially worthy players, and, by definition (rule), some players get left off.  Which leads to . . .

I can live with the 5% threshold (i.e., a player must appear on at least 5% of the ballots to remain eligible), but it does have Draconian consequences.  Do I think Jim Edmonds is a Hall of Famer?  No.  But I think he merits a discussion for more than one vote.  Well, that ain’t gonna happen, as he only appeared 2.5% of the ballots in his first year, and so he will no longer be part of the discussion/vote.

With respect to the integrity clause, see below (filed, in most instances, under “hypocrisy”).

But let’s not deal with the rules, as those have been covered ad nauseum.  One angle that has not been hit (hard enough?) is the kids.  And while it may be cliché, I must implore the Hall of Fame and the Baseball Writers Association of America (BBWAA) to “think of the children!”.

As I have written here before, I view the Hall of Fame as a baseball museum.  And I am not alone in that assessment.  You know who else believes it is a museum?  The National Baseball Hall of Fame and Museum.  It is right there in the title. 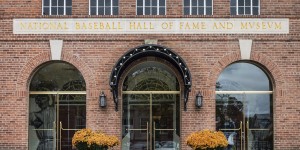 And, in case there was any confusion, their home page specifically states: “The National Baseball Hall of Fame and Museum is a not-for-profit educational institution dedicated to preserving the history of the game, honoring its outstanding contributors and connecting generations of fans.”

Based on the foregoing, it begs the question as to why the HoF Board of Directors, and more importantly, the BBWAA, feel the need to be the protectors of the game?  Why do individual writers take it upon themselves to decide – for themselves – who has the right to be enshrined in the hallowed halls?  Why hasn’t the Hall of Fame stepped in to formally instruct the BBWAA that its writers are required to abide by both the rules (see above) and the Hall’s mission statement?

Since they haven’t, I will.  If any member of the BBWAA is reading this, allow me to break down the Hall of Fame’s exact words (shout out to Greg Brady):

I.  The Hall of Fame is an educational institution.  Taken to the most absurd extreme, the HOF is a little red school house where adults and children alike can go to learn about this great game.  And even better, there are no tests or rulers to the backs of hands.  It is a giant classroom.  And it is up to us – as parents – to make sure that the lessons taught within those walls resonate with our children; and that responsibility does and should require that we parse through the good and bad, and explain the difference.  We parents don’t need stodgy writers doing that work for us.

II.  The Hall of Fame is dedicated to preserving the history of the game. Maybe it is written in invisible ink, but I cannot see where it states that the HOF is dedicated to preserving only the positive, feel-good, highly moral history of the game.  Do our kids’ history classes take Thomas Jefferson out of textbooks because he engaged in activities (slave-ownership) that we find morally repugnant?  No, because it is our nation’s history – for better or worse.  How about the massacre at My Lai?  Do we just pretend that never happened?  And more on point, Babe Ruth (drinker, lothario), Ty Cobb (racist sonofabitch), Willie Mays (admitted amphetamine user), Gaylord Perry (admitted cheater – hell, his autobiography is called “Me and the Spitter: An Autobiographical Confession”), and many, many more players who could use a decent Yom Kippur fast have been inducted into the Hall of Fame.  Our past is checkered, and it from that past that we (and, more importantly, our kids) learn important lessons; lessons that can inform and instruct behavior in the future.

III.  The Hall of Fame honors its outstanding contributors.  Without parsing words, how do we define “outstanding”?  If you define “outstanding” as “free from performance enhancing drugs” – as many writers seem to have do on each ballot – then we need to dig deeper and define “performance enhancing drugs”.  We have scads of players in the Hall who took amphetamines, snorted cocaine, and ingested other substances that were technically, practically, and actually illegal.  But, if that is how you define “outstanding”, don’t you have to also define it as “free from illegally getting a competitive advantage”?  We have scads of players in the Hall who admittedly cheated the game (via corked bats, sharpened spikes, loaded baseballs, and the like).

And, before we even get started, I guess we need to define “honor”.  Does “honor” only mean a bronze plaque?  Can “honor” include having key pieces of a player’s equipment in the archives and on display, referencing momentous events and key records?  Because we have scads of memorabilia in the HoF that was once owned and used by the very same players who are now essentially being blackballed from Hall.  Maybe we should take a second to teach our kids a little about hypocrisy.

How do the keepers of the Hall justify having the balls from Roger Clemens’ two 20-strike out games, but not his bust?  How about Barry Bonds’ bats from record-breaking homeruns, but not his plaque?  Do these custodians believe it is okay for the Hall of Fame to honor events in the game but not those who contributed to those events?

IV.  Lastly, a written goal of the Hall of Fame is connecting generations of fans.  So I would ask this question of the gatekeepers: How do I connect my generation with my kids’ generation if an entire era is precluded from admission?  How do I walk your hallowed halls and “connect” my generation with my kid’s generation if the pitcher with the most wins is not there?  If the slugger with the most home runs is not there?  If the hitter with the most hits is not there?  If (and I am forlornly looking 6 years into the future) the guy who was one of the greatest post-season hitters of all time is not there?  Explain to me, denizens of Mt. Pious, how to have a discussion about things that are not there.  When my father was born, the game was segregated; when I was born, players openly smoked in the dugout, snorted cocaine, took amphetamines between innings, and were ostensibly owned by the owners; when my son was born, players were putting up gaudy statistics using every manner of drug under the sun and inside a syringe.  All of that happened.  And no amount of white washing, or Rule of 10, or 10-year Limitations, or “integrity clause” arguments can change that history.  All these restrictions do is disconnect one generation from the next.

I have never been to the National Baseball Hall of Fame and Museum.  I plan to go this summer for the first time, and I could not be more excited.  However, the experience will be less – how much less I cannot be sure – because it will not have some of the players who need to be there to educate my son, to preserve the history of the game, to connect my generation to my son’s.  In short, the experience will be less because the Hall of Fame – due to the HoF Board of Director’s and the BBWAA’s unique concept of propriety – has failed to lived up to the Hall’s own mission statement, to the Hall’s own standards.

By failing to provide a complete history – warts and all – they have collectively failed to abide by their own integrity clause.

From Mary Poppins to The Simpsons and to countless child welfare tomes in between, “think of the children” has been used in its literal sense to advocate for children’s rights.  So, in that spirit, I ask, no, beg of the Hall of Fame and the Baseball Writers of America to “think of the children!”

Only 34 days until pitchers and catchers report.