As an ode to my mom, who never missed an opportunity to say something whacky or just plain funny, I present to you the “blivet”. Sure, we could go with Webster, and tell you that a “blivet” is also known as a poiuyt, devil’s fork, or widget.  I could explain to you that a blivet is an undecipherable figure, an optical illusion, and an impossible object; something that appears to have three cylindrical prongs at one end which then mysteriously transform into two rectangular prongs at the other end.  Here, stare at it for a while. 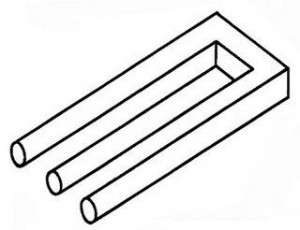 But no, that is not what I am talking about.

Long before there was ever the concept of the Urban Dictionary, my mom was extolling the virtues and vices of the “blivet”, which, in her and UD’s world, is defined as 10 pounds of shit in a 5 pound bag.

What, on God’s green earth, you ask, does this have to do with baseball?  Ah, I am glad you asked.

Every day I pick my son up from baseball – be it a game or a long practice – and each time I am treated to a protracted delay while he tries to put all of his equipment into what I deem to be an already very large bag.  My son is truly shoving 10 pounds of shit into a 5 pound bag.  He then turns it upright, rolls it to the car, and allows me to wrench my back lifting it into the trunk.  Who needs all 10 pounds of this shit?  Not to get all “get off of my lawn”, but in my day…

…In my day, we rode our bikes to the park and to practice.  If we were lucky, we had a bat (usually wood, although that changed in the mid-’80s) that we held across our handlebars, with our lone glove on one end of the bat and our cleats tied to the other.  We held on for dear life (no helmets required), and then rode home at dusk.  In between, we played some pretty good baseball.

While I acknowledge that riding your bike to practice today is both impractical and against all societal norms, the rest of it could theoretically still hold true.

Alas, that is not the case.  Here is a brief summary of what currently resides in my son’s baseball bag (and yes, I am 89.4% to blame for this): 1 very expensive, totally unnecessary, top of the line, aluminum (or composite, who the hell knows) baseball bat; 1 pitcher’s glove; 1 outfielders’ glove; 1 first baseman’s glove; 1 catcher’s glove; a set of shin guards; a chest protector; a catcher’s mask; a batting helmet; multiple pairs of batting gloves; 2 different arm sleeves; a few loose baseballs; 2 wrist protectors (one a custom Evoshield and another off-brand that actually provides more protection); an odd wristband; and a pair of cleats.  He isn’t a player so much as he is a section of Sports Authority.

As I have previously written, I remember with great clarity the day I got my first first baseman’s glove, which upped my equipment tally by 33.3%.  My son could lose a $200 mitt in his bag and forget it even exists.

Each kid today must have his own helmet – heaven forbid lice gets spread.  Each must have his own bat – when did the Easton corporation perform a mind meld on every Little Leaguer such that his life is incomplete if he doesn’t have the latest SL or Mako model?  Each kid must have multiple mitts.  How could a fielder ever handle first base with a glove that has individualized fingers?  Some players now sport two pairs of cleats – rubber for Little League and metal for travel ball.  Cleats that, ostensibly, he will out grow before he wears out.  And each player must have a high performance bag to carry all this swag – be it a cool backpack with slots for multiple bats (really?) or a bag with wheels to protect their precious lumbars.  When did this happen?  How did this happen?  Why did this happen?

As to when, it must have been some time in the past 5-10 years, but maybe it happened even earlier.

As to how, that is simple.  We, as parents, allowed it to happen.

As to why, I have a few thoughts, in no particular order:

This phenomenon, rest assured, is not exclusive to baseball; it is just the world we live in today.  When I pick my daughter up from her dance studio, after her two hour practice (which, of course, includes a private lesson), I am stuck waiting in the lobby while she jams all of her dance gear into a pink, embroidered (with her name), customized (for her dance team), wheeled blivet.

For generations people have had as their solitary goal that their children have a better life than they.  In many ways, that is the American Dream.  I just don’t think, when immigrants started landing on Ellis Island in the late 19th century, they could have ever envisioned that all of their worldly belongings – their own personal blivets – would fit into a knapsack smaller than the bag my son takes to the field every day.

And when the children of those immigrants first picked up a broomstick and a Spaldeen, and ran from manhole to manhole, avoiding parked cars and angry shop owners, I highly doubt they ever worried about modified trap webbings, BBCOR technology, or Pittards digital sheepskin leather.  They cared about the game of baseball – and getting home before the streetlights came on.

Ah well, this is the monster we created; we could always say, “no”.

So, if you can find one at the bottom of that suitcase your player rolls into the dugout, I say to you . . .