USE YOUR HEAD…BY USING YOUR FEET

USE YOUR HEAD…BY USING YOUR FEET

Why do players insist on sliding head first – into any base.  I know there are a ton of people who disagree with me on this, and to them I will simply say, “You’re wrong!”  (See below)

I was coaching third in a game a few weeks ago and an 11-year old kid came ‘round second and slid headfirst right into third base; and then walked feet-first right into the dugout, as Little League rules are smart and strictly prohibit sliding on your belly (excluding, of course, going back to the bag).

When I asked him “who taught you that?” he responded with: “I taught myself.”  I highly doubt that, but no matter.  It is crazy to me that players who make their livings (millions and millions of dollars of livings) with their hands, wrists, and shoulders, still take this unnecessary risk, day in-day out.

There are some of you reading this shaking your head – who say that it is I who is wrong, that it is faster and safer to slide headfirst.  To you naysayers, I present to you:

The National Institute of Health:

The American Journal of Sports Medicine:

My biggest issue is with guys who dive into first base.  David A. Peters, Ph.D. of the McDonnell Douglas Professor of Engineering at Washington University in St. Louis, settles this one for us.  He says the only advantage of any slide into first base is to avoid the first baseman’s tag when he has to come off the bag to spear an errant throw.  Sliding does not get a player to first base more quickly.  Professor Peters stated that: “Mathematically, you might think there’s an advantage, but leaving your feet is actually a detriment because you’re no longer pulsing (pumping your legs) and you start to decelerate.  When you’re running, your get your feet out in front of the center of gravity, so you’re getting maybe three or four steps of an advantage.”

Don’t believe Dr. Peters, how about the guys at Sports Science:

I guess MLBers don’t subscribe to Dr. Peters’ journal or watch Sports Science, because many of the players listed below must still think diving is faster than remaining upright.  And so they continue to slide headfirst; and they continue to get hurt.

It happened again . . . on Opening Day.  John Jaso – the Rays catcher who came over in a trade from Oakland and who was supposed to be a mainstay of the rebuilt ball club – decided to dive headfirst into second base and, shock of shock, sprained his wrist.  Goodbye first two weeks (at a minimum), hello disabled list.

Here is a totally not comprehensive list of guys with questionable base-running decision-making over the past few seasons:

Josh Hamilton, while playing for the Rangers, broke his humerus diving headfirst into home plate on a foul pop.  This play was bad on so many levels that I have chosen not to discuss any of them – it is simply too annoying.

But Josh was not through.  While playing for the Angels, and pocketing 5/$125M, he dove headfirst into first base.  Result: Torn ligaments in his thumb, out 47 games.  (In other words, he was paid $7.25M to sit on the bench due to his bone-headed play.)

Early in 2014, the Wild Horse (‘s Ass), Yasiel Puig, strained a ligament in his thumb diving into first base. 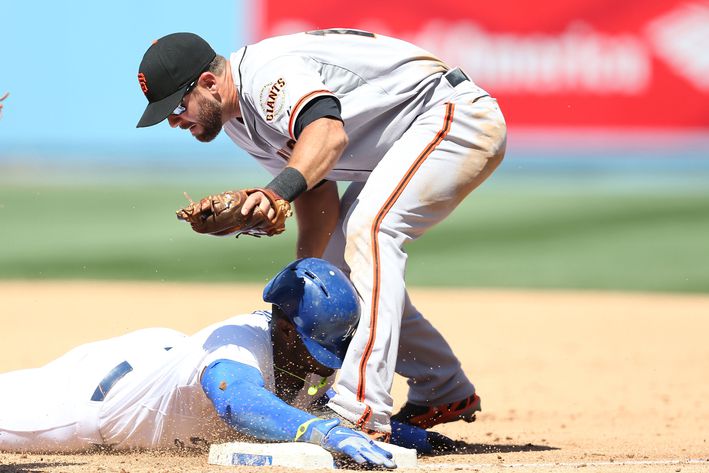 On Opening Day, 2013, Dustin Pedroia tried to beat a throw at first by diving into the bag.  He tore the ulnar collateral ligament in his thumb.  He refused to go on the DL, and played the entire season with the injury, but his numbers were down; he required off-season surgery; and didn’t recover as quickly as he had hoped.  As a result, he had another off year in 2014.  If you are scoring at home, that is two years of lost production to try to save (and to actually lose) 10 milliseconds on Opening Day.  Was the risk worth the (lack of) reward?

This one is priceless.  After being hit by a pitch in 2011, Shin Soo Choo had surgery on his thumb.  So, how did he go about protecting that injury?  In 2013 he slid headfirst into first.  This, of course, resulted in his spraining the same thumb.  He had this to say:

“Stupid play.  I tell myself, and I tell a lot of players, the worst play is the headfirst slide into first base and home plate.  But I did it.  I don’t know why I did it.”  Wise words from a wise man.

Michael Bourne didn’t get injured on his actual dive into first base, rather he was spiked when Matt Thornton (covering on the play) came down on his hand.  He missed 20 games.

Absent trying to avoid a tag coming down the line, what about this play ever makes sense?  This really may be the worst play in all of sports.

But first base isn’t the only culprit.

Rafael Furcal broke his thumb sliding headfirst into third base.  The injury was so bad that he considered retiring, and he hasn’t played regularly since 2012.

Yunel Escobar made an appointment with a neurologist after he collided with Andy LaRoche’s knee at third base.  Diagnosis: Concussion.

How about this one.  A player who, by all accounts, has abundant potential, but a chronically bum shoulder.  So what does he do: slide headfirst, of course.  Only, as luck would have it, Ryan Zimmerman didn’t hurt his shoulder.  No, he tore an abdominal muscle that required surgery and caused him to miss six weeks.

Ben Zobrist missed a few weeks with a dislocated thumb diving into second.

Not to be outdone, Alex Gordon missed four weeks with a broken thumb after diving into second base.

Jason Heyward sprained his thumb diving into third.  He avoided the DL, but hit .172 in his next 24 games.

Billy Hamilton jammed his middle finger diving into second base.  If I have to give anyone a pass, it may be Billy Hamilton.  This guy is so fast and runs so low to the ground – a la Ricky Henderson (kids, ask your parents) – that his momentum truly carries him forward (see this play from last week).

Carl Crawford injured not one, but two fingers with a dive into second base (a double-whammy of stupidity).

Ryan Ludwick tore his labrum, and missed 116 games, after diving into third.

Bryce Harper required surgery on his thumb and missed two months, also at third base.

Nolan Arenado missed six weeks after diving into second.  Thus denying us 37 games where he could potentially make plays like this:

Ian Kinsler suffered a stress reaction (one step below broken ribs, but worse than an oblique injury) diving into third.  He missed 25 games.

Early last season, Mike Napoli dove into third base.  He dislocated his ring finger.  He went on the 15-day DL, and had to tape his hand before every at bat for the remainder of the season.  I really only included this injury so I could show this picture:

I could keep going, but I think you get the idea.

Davey Lopes was able to steal 557 bases in his career, making him one of the greatest if all time.  And yet, to hear him tell it, “I never slid headfirst, ever.”

Medical studies have confirmed that “sliding headfirst poses a far greater risk of serious injury because of the exposure of the head and neck.  Anything from a concussion to a cervical strain or even spinal-cord injury might result, particularly when there is contact with a player blocking the path.  In addition, the propensity for upper-extremity injury is heightened, not only because of the mechanics involved and collisions that are likely, but also because these joints are more vulnerable than the sturdier joints of the lower body — which have a greater preponderance of injury with feet-first slides.  Even the abdominal muscles are at greater risk for strains with headfirst slides due to the outstretched position of the body.”

Or, to keep it simple, ask yourself how many injuries you have seen, read, or heard about, when a player slides feet-first.

And with that, the offense rests.