For years I have wondered, and have done a decent amount of research.  I have checked the newspapers and the interwebs.  I watched interviews and read everything I could during the 25-year anniversary.  And yet, the answer to my question – my great white whale – remains elusive.

Who was driving this car: 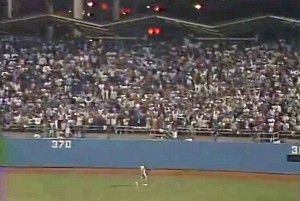 This picture represents so many things.  Let’s start with the easy one: It represents one of the greatest and most improbable moments in World Series history.

It also represents the classic Los Angeles sports fan who arrives late and leaves early.  This is done, ostensibly, to beat LA traffic.

It represents the power of sports radio.  There is no world in which the driver of that car wasn’t listening to AM 790 when Dennis Eckersley tried to slip a 3-2 slider past a hobbled Kirk Gibson.

This moment – this specific scene of the right field bleachers and the parking lot of Dodger Stadium – is so indelible, is so burned into my psyche, that it has become a meme in my life.  “You don’t want to be the guy in the parking lot when Gibby hit the dinger” is a phrase that I have uttered on countless occasions over the past nearly thirty years.

My boss suffered this indignity just this past weekend.  With the Clippers up 18 and five minutes to go, he left Staples with his son, and victory, in tow.  When he turned on the highway, he realized that things aren’t always what they seem.  He was the “guy in the parking lot when Gibby hit the dinger”.  Sure, a basically meaningless basketball game in March is by no means the first game of the World Series, but the theory still holds.

But this mantra was clearly in play on the first weekend of February.  With a little bit of luck, considerable Expedia alacrity, and a willingness to pay the price, on just three days’ notice, we were headed to Houston for the Super Bowl.  We arrived very late Saturday night, spent all Sunday morning at FanFest, and then headed to NRG Stadium.

By the time we got there, my son – who hadn’t slept Friday night out of sheer excitement; who got little sleep Saturday night because of late arrival/time change/more excitement/early wake-up – was suffering from a pretty bad headache.  I thought food might solve the problem; it didn’t.  I thought Sprite might solve the problem; it didn’t.  A trip to First Aid for a pair of ear plugs didn’t do the job either.  As the game wore on, and the contest became even more lopsided, the headache grew worse.

By the middle of the third quarter, with the Patriots down 28-3, my son sent me the following texts (he was sitting with his cousin at the time): “Not sure if I can make it through the rest of the game”; “I’m ready to go to bed”; “Can we leave early”; “The game is pretty much over”.

By the time I met back up with him, the Pats had scored a touchdown (but missed the extra point, natch), and were trailing 28-9.  He was in a bad way.  Now, as an aside, I suffer from migraines; and I know that feeling when the headache literally takes over your body and you have no energy to even think.  All you want/need is a quiet, dark room with a cool washcloth on your head.  What you most definitely don’t need are the bright lights of a domed stadium, with a cacophonous crowd losing their shit on every play.

We met on the concourse with about two minutes to go in the third quarter, and the Falcons in Patriots’ territory.  We had the following exchange:

While we were having this conversation, there was a holding call, an incomplete pass, and a sack.  Atlanta punted.  We stayed.  And the rest, as they say, is history.

We are twenty-nine years removed from the day after my 16th birthday.

Twenty-nine years have passed since what has been deemed the greatest moment in Los Angeles sports history.

It has been twenty-nine years since we heard two of the all-time great calls: “She is . . . gone” and “I don’t believe what I just saw”.

And we are twenty-nine years from the greatest steering-wheel punch of all time; when one guy’s desire to beat traffic became the most ignominious break slam of all time.

I just wish I knew who that guy was.  He is my white whale.