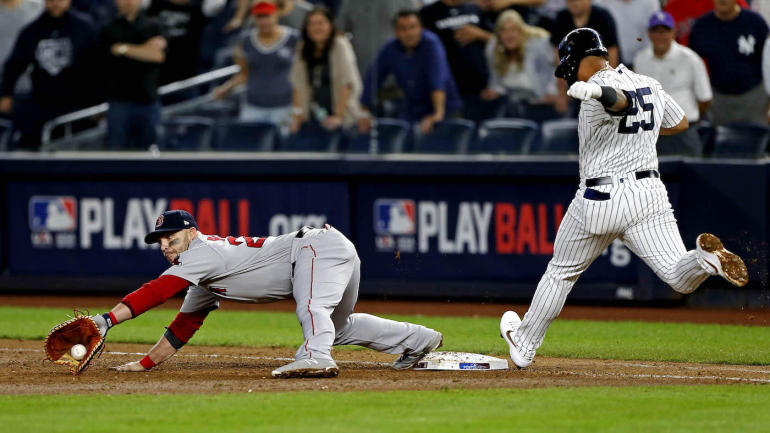 The Demons Are Gone

October 16, 2003, bottom of the 11th inning of Game 7 of the American League Championship Series, Tim Wakefield on the mound for his second inning of work.

That night, as we recall, the Red Sox held a three-run lead with six outs to go to advance to the next round (in this case, the World Series). And then the slow motion car crash began.

As a lifelong Red Sox fan, you could feel it: horrific dread; impending doom; we had seen it all before and there was no good way for this to end. Over the years the soul-crushing details may have been different, but the denouement was always the same: Red Sox players alone in the dugout, another team celebrating on the field; Red Sox fans in the stands or on their couch, hands on their heads and tears in their eyes. It hurts just to write the words.

Regardless of the vantage point, the outcome was preordained: the Red Sox were destined to fail.

A year later the heartbreak stage was set yet again, but maybe less painfully. After a 19-8 drubbing in Fenway on a cold Saturday night, it was a fait accompli that the season would be over the following night. A humiliating sweep at the hands of our archrivals, in our park, a year and a day after having our guts ripped out in New York. Game 3 of the ALCS ended at 12:30am local time, so technically, the misery ended Sunday morning.

Now I don’t want to get ecclesiastical, or discuss divine intervention, but something happened in the 19 hours and 50 minutes before the next game began. Maybe it took a wee bit longer; maybe it took nearly twenty-four hours…until 12:01am Monday morning for the planets to shift, for the stars to align, for something otherworldly to happen. But make no mistake, something did happen on that fall New England day of worship.

At 12:01am Monday morning, EVERYTHING changed. It was at that moment that Kevin Millar drew a leadoff walk off Mariano Rivera.

The 3-1 pitch that missed up and in was the first tremor. In years past, Millar takes a hack at ball four, runs the count full, and Ks on a 3-2 cutter off the plate for the first out of the ninth. But now he was standing on first base.

The earth really started to move at 12:03am, when Dave Roberts barely made it back to the bag after a quick pick-off throw. In years past, he would have been a hair slow, allowing for an ignominious and yet fitting way to lose the potential tying run. But now, he just exhaled with relief, wiped the dirt off his jersey, and took another massive lead.

The waters began to recede from the shore at 12:04am, when Roberts’ left hand touched second base a millisecond before the shortstop’s glove. In years past, pundits would forever be talking about how it took the perfect Posada throw and the perfect Jeter tag to get Roberts, and unfortunately for the Fenway Faithful, the Red Sox were denied again. But now, the tying run was in scoring position.

The earth tilted on its axis at 12:05am, when Bill Mueller singled up the middle to tie the game.

And buildings began to fall at 1:22am, when David Ortiz launched a walk-off two-run dinger into the Yankees bullpen to force a Game 5.

Somewhere between 12:01am Sunday morning and 1:22am Monday morning, the fate of an entire organization – an entire city, hell, an entire region – undeniably changed forever.

And so it was that we found ourselves in Yankee Stadium on Tuesday, October 9, 2018. The Red Sox again leading by three runs with six outs to go to get to the next round (in this case, the ALCS). In this version, the Red Sox managed to narrow the margin to three outs to go with a three-run lead and their (the league’s?) best closer on the hill. And then the slow motion car crash began again.

As a lifelong Red Sox fan, you could feel it: horrific dread; impending doom; we had seen it all before and there was no good way for this to end.

But wait. Although we have suffered the ill effects of sports PTSD, we have now come out the other side. We have won three World Series titles in the last 14 years; we have vanquished the Yankees – at Yankee Stadium, no less – on multiple occasions. We knew – in our head if not our hearts – that this time could be different.

A four-pitch walk to Aaron Judge (none were even close) followed by a Didi Gregorius single on a 1-2 pitch that could have been a groundout to first but for the previous walk. Pre-2004, Giancarlo Stanton would not have just represented the tying run, he would have become it. Alas, that world no longer exists. He struck out, meekly.

Another four-pitch walk loaded the bases, and a hit batter made it a two-run game. The ghosts were stirring, but their appearance was not certain.

Gary Sanchez – the Red Sox’s current nemesis – came to the plate. A single ties it, an extra base hit wins it, and a homer crushes the spirit of New England. In years past, we all know what would have happened.

Craig Kimbrel got Sanchez 0-2 with two great fastballs, and then proceeded to run the count full with three pitches nowhere close to the strike zone (#3, #5, #6, to the right). The seventh pitch of the at bat was a dead red, center-cut, fastball (see #7) that Sanchez somehow just missed. Off the bat it didn’t look like much, but it kept carrying deeper and deeper into the New York night. On hits like this, I watch the fielder, as he will give you a good indication of whether or not the ball is playable; but I also watch the fans. In this case, the further Andrew Benintendi drifted towards the wall, the more excited the fans became, the sicker I began to feel.

That play lasted a LONG time. In fact, from the moment the ball left the bat until it landed in the glove, nearly seven second elapsed.

To put that in perspective, the longest hang time of an NFL punt last week was less than six seconds. If we were driving down the highway at 60 MPH, we would travel nearly 600 feet before that ball landed. If our eyes were trained on the game, we would have blinked at least twice between contact and the out being recorded. There is a lot one can do in seven seconds, including, apparently, hold your breath.

The Red Sox 108-win season could have been upended if Sanchez’s ball had flown five more feet. But that would have been a pre-2004 outcome. That was before the world changed.

When super-rookie Gleyber Torres hit that little roller to third (not to be confused with “a little roller up along first”), any number of things could have gone wrong, to wit:

Any of those things could have or would have happened prior to 12:01am on October 18, 2004. And we, as Red Sox fans, sat there Tuesday night ever-fearful that history was going to repeat itself. That the good times were over and that David Price (in Pedro Martinez’s stead) would be on the receiving end of “Who’s Your Daddy?” chants for the rest of time.

When the final out was recorded and the Red Sox had won, Bill Simmons tweeted: 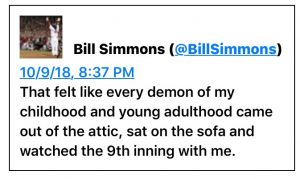 Alas, those demons are gone; they have retreated to the attic or the basement or the Bronx. Sure, the Red Sox will at some point rip our hearts out again; sure, the Yankees will at some point trounce the BoSox again; sure, not every break will go our way forevermore. But, this is not a pre-2004 world. We as Red Sox fans do not live with the knowledge (only the presumption) that the worst will inevitably occur. Now we can be rational, calm, measured, knowing that the only certainty is that bad things will happen to…the Indians.